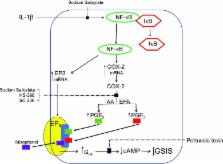 Inhibition of prostaglandin synthesis as a mechanism of action for aspirin-like drugs.

Julie Gleason,  Neil R. Robertson,  Thai Tran (2002)
Previous work has suggested that functional interrelationships may exist between inhibition of insulin secretion by interleukin (IL)-1beta and the endogenous synthesis of prostaglandin E(2) (PGE(2)) in the pancreatic islet. These studies were performed to ascertain the relative abundance of E prostaglandin (EP) receptor mRNAs in tissues that are major targets, or major degradative sites, of insulin; to identify which EP receptor type mediates PGE(2) inhibition of insulin secretion in pancreatic islets; and to examine possible sites of action through which sodium salicylate might affect IL-1beta/PGE(2) interactions. Real-time fluorescence-based RT-PCR indicated that EP3 is the most abundant EP receptor type in islets, liver, kidney, and epididymal fat. EP3 mRNA is the least, whereas EP2 mRNA is the most, abundant type in skeletal muscle. Misoprostol, an EP3 agonist, inhibited glucose-induced insulin secretion from islets, an event that was prevented by preincubation with pertussis toxin, by decreasing cAMP. Electromobility shift assays demonstrated that sodium salicylate inhibits IL-1beta-induced nuclear factor-kappaB (NF-kappaB) activation. Sodium salicylate also prevented IL-1beta from inducing EP3 and cyclooxygenase (COX)-2 gene expression in islets and thereby prevented IL-1beta from inhibiting glucose-induced insulin secretion. These findings indicate that the sites of action through which sodium salicylate inhibits these negative effects of IL-1beta on beta-cell function include activation of NF-kappaB as well as generation of PGE(2) by COX-2.

Destruction of pancreatic beta-cells by transgenic induction of prostaglandin E2 in the islets.

Masanobu Oshima,  Hiroko Oshima,  Makoto Taketo (2006)
Type 2 diabetes mellitus is characterized by insulin resistance of peripheral tissues and dysfunction of pancreatic beta-cells. Furthermore, the number of pancreatic beta-cells decreases as a secondary effect of advanced type 2 diabetes, although the molecular mechanism has not been elucidated. Recently, it has been shown that hyperglycemic conditions induce the expression of cyclooxygenase-2 in pancreatic islets and increase the downstream product prostaglandin E(2) (PGE(2)). To investigate whether high glucose-induced PGE(2) has an adverse effect on pancreatic beta-cells, we generated transgenic mice (RIP-C2mE) that express cyclooxygenase-2 and microsomal prostaglandin E synthase-1 in their beta-cells using the rat insulin-2 gene promoter (RIP). The homozygous RIP-C2mE (Tg/Tg) mice showed severe hyperglycemia from six weeks of age. Although the heterozygous RIP-C2mE (Tg/-) mice showed normal blood glucose levels throughout their lifetime, this level increased significantly compared with that of wild-type mice when glucose was loaded. The relative number of beta-cells to the total islet cell number was reduced to 54 and 14% in the RIP-C2mE (Tg/-) and (Tg/Tg) mice, respectively, whereas that in the wild-type mice was 84%. Importantly, the proliferation rate in the islets of the RIP-C2mE (Tg/Tg) mice at four weeks of age decreased significantly in comparison to that in the wild-type mice. Because beta-cells replicate not only during the postnatal period but also in the adult pancreas at a basal level, it is possible that increased PGE(2) signaling thus contributes to the reduction of the pancreatic beta-cell mass through inhibition of proliferation, thereby aggravating diabetes further.