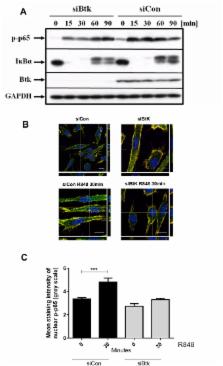 Tumour necrosis factor (TNF) is produced by primary human macrophages in response to stimulation by exogenous pathogen-associated molecular patterns (PAMPs) and endogenous damage-associated molecular patterns (DAMPs) via Toll-like receptor (TLR) signalling. However, uncontrolled TNF production can be deleterious and hence it is tightly controlled at multiple stages. We have previously shown that Bruton's tyrosine kinase (Btk) regulates TLR4-induced TNF production via p38 MAP Kinase by stabilising TNF messenger RNA. Using both gene over-expression and siRNA-mediated knockdown we have examined the role of Btk in TLR7/8 mediated TNF production. Our data shows that Btk acts in the TLR7/8 pathway and mediates Ser-536 phosphorylation of p65 RelA and subsequent nuclear entry in primary human macrophages. These data show an important role for Btk in TLR7/8 mediated TNF production and reveal distinct differences for Btk in TLR4 versus TLR7/8 signalling.

Structural Analysis Reveals that Toll-like Receptor 7 Is a Dual Receptor for Guanosine and Single-Stranded RNA.

Zhikuan Zhang,  Umeharu Ohto,  Takuma Shibata … (2016)
Toll-like receptor 7 (TLR7) is a single-stranded RNA (ssRNA) sensor in innate immunity and also responds to guanosine and chemical ligands, such as imidazoquinoline compounds. However, TLR7 activation mechanism by these ligands remain largely unknown. Here, we generated crystal structures of three TLR7 complexes, and found that all formed an activated m-shaped dimer with two ligand-binding sites. The first site conserved in TLR7 and TLR8 was used for small ligand-binding essential for its activation. The second site spatially distinct from that of TLR8 was used for a ssRNA-binding that enhanced the affinity of the first-site ligands. The first site preferentially recognized guanosine and the second site specifically bound to uridine moieties in ssRNA. Our structural, biochemical, and mutagenesis studies indicated that TLR7 is a dual receptor for guanosine and uridine-containing ssRNA. Our findings have important implications for understanding of TLR7 function, as well as for therapeutic manipulation of TLR7 activation.

Jennifer A. Dunne,  C Jefferies,  Elizabeth Brint … (2003)
In this study we have identified members of the Toll-like receptor (TLR) family (namely, TLRs 4, 6, 8, and 9) as proteins to which the intracellular protein tyrosine kinase, Bruton's tyrosine kinase (Btk), binds. Detailed analysis of the interaction between Btk and TLR8 demonstrates that the presence of both Box 2 and 3 motifs in the Toll/interleukin-1 receptor domain was required for the interaction. Furthermore, co-immunoprecipitation experiments revealed that Btk can also interact with key proteins involved in TLR4 signal transduction, namely, MyD88, Mal (MyD88 adapter-like protein), and interleukin-1 receptor-associated kinase-1, but not TRAF-6. The ability of Btk to interact with TLR4 and Mal suggests a role for Btk in lipopolysaccharide (LPS) signal transduction. Stimulation of the human monocytic cell line THP-1 with LPS resulted in an increase in the level of tyrosine phosphorylation of Btk (indicative of activation). The autokinase activity of Btk was also stimulated after LPS stimulation. In addition, a dominant negative form of Btk inhibited TLR4-mediated activation of a nuclear factor kappaB (NFkappaB)-dependent reporter gene in HEK293 cells as well as LPS-induced activation of NFkappaB in the astrocytoma cell line U373 and the monocytic cell line RAW264.7. Further investigation revealed that the Btk-specific inhibitor, LFM-A13, inhibited the activation of NFkappaB by LPS in THP-1 cells. Our findings implicate Btk as a Toll/interleukin-1 receptor domain-binding protein that is important for NFkappaB activation by TLR4.

Alexander N R Weber,  Zsofia Bittner,  Xiao Liu … (2017)
Bruton’s tyrosine kinase (BTK) was initially discovered as a critical mediator of B cell receptor signaling in the development and functioning of adaptive immunity. Growing evidence also suggests multiple roles for BTK in mononuclear cells of the innate immune system, especially in dendritic cells and macrophages. For example, BTK has been shown to function in Toll-like receptor-mediated recognition of infectious agents, cellular maturation and recruitment processes, and Fc receptor signaling. Most recently, BTK was additionally identified as a direct regulator of a key innate inflammatory machinery, the NLRP3 inflammasome. BTK has thus attracted interest not only for gaining a more thorough basic understanding of the human innate immune system but also as a target to therapeutically modulate innate immunity. We here review the latest developments on the role of BTK in mononuclear innate immune cells in mouse versus man, with specific emphasis on the sensing of infectious agents and the induction of inflammation. Therapeutic implications for modulating innate immunity and critical open questions are also discussed.