Morning glory syndrome with Moyamoya disease: A rare association with role of imaging 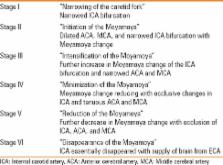 Morning glory disc anomaly (MGDA) is a congenital optic nerve anomaly characterized by a funnel-shaped excavation of the posterior globe that incorporates the optic disc. Most cases are isolated and not associated with systemic anomalies. Systemic anomalies include midline cranial facial defects, hypertelorism, agenesis of the corpus callosum, cleft lip and palate, basal encephalocele, congenital forebrain abnormalities, and renal anomalies. We report a case of 4-year-old male child who presented with reduced visual acuity on left eye with poor fixation. The left eye demonstrated 6-diopter esotropia. Examination of fundus revealed features of MGDA. The child was further subjected to magnetic resonance imaging (MRI) and magnetic resonance angiography (MRA) of brain to rule out other associated anomalies. It demonstrated narrowing at the distal part of internal carotid artery on both sides, left more than right with prominence of lenticulostriate and leptomeningeal vessels. MRI also revealed funnel-shaped excavation of the posterior globe on the left side consistent with MGDA. Ascertaining the accurate diagnosis of MGDA guides appropriate ophthalmic management and should also prompt a search for associated intracranial abnormalities. Although the diagnosis of MGDA is typically made clinically, imaging may feed supplementary value in establishing the diagnosis and reveal the extent and character of associated ocular abnormalities, and cross-sectional imaging permits for evaluation of the globe in the setting of associated opacities of the refractive media, including persistent hyperplastic primary vitreous, which may alleviate the capacity to make this diagnosis on the basis of the fundoscopy examination alone.

James Hurley,  H H Batjer,  Bernard R. Bendok … (2009)
Moyamoya, meaning a "hazy puff of smoke" in Japanese, is a chronic, occlusive cerebrovascular disease involving bilateral stenosis or occlusion of the terminal portion of the internal carotid arteries (ICAs) and/or the proximal portions of the anterior cerebral arteries and middle cerebral arteries (MCAs). The Ministry of Health and Welfare of Japan has defined 4 types of moyamoya disease (MMD): ischemic, hemorrhagic, epileptic, and "other." The ischemic type has been shown to predominate in childhood, while the hemorrhagic type is more often observed in the adult population. The highest prevalence of MMD is found in Japan, with a higher female to male ratio. Studies have shown a possible genetic association of MMD linked to chromosome 17 in Japanese cases as well as in cases found in other demographics. During autopsy, intracerebral hematoma is found and most commonly serves as the major cause of death in patients with MMD. Moyamoya vessels at the base of the brain are composed of medium-sized or small muscular arteries emanating from the circle of Willis, mainly the intracranial portions of ICAs, anterior choroidal arteries, and posterior cerebral arteries, forming complex channels that connect with distal positions of the MCAs. Off of these channels are small tortuous and dilated vessels that penetrate into the base of the brain at the site of the thalamoperforate and lenticulostriate arteries. On angiography, there is the characteristic stenosis or occlusion bilaterally at the terminal portion of the ICAs as well as the moyamoya vessels at the base of the brain. Six angiographic stages have been described, from Stage 1, which reveals a narrowing of the carotid forks, to Stage 6, in which the moyamoya vessels disappear and collateral circulation is produced solely from the external carotid arteries. Cases with milder symptoms are usually treated conservatively; however, more severe symptomatic cases are treated using revascularization procedures. Surgical treatments are divided into 3 types: direct, indirect, and combined/other methods. Direct bypass includes superficial temporal artery-MCA bypass or use of other graft types. Indirect procedures bring in circulation to the intracranial regions by introducing newly developed vasculature from newly approximated tissues. These procedures may not be enough to prevent further ischemia; therefore, a combination of direct and indirect procedures is more suitable. This article will give a review of the epidemiology, natural history, pathology, pathophysiology, and diagnostic criteria, including imaging, and briefly describe the surgical treatment of MMD.