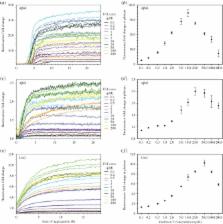 Matthew Biancalana,  Shohei Koide (2010)
Intense efforts to detect, diagnose, and analyze the kinetic and structural properties of amyloid fibrils have generated a powerful toolkit of amyloid-specific molecular probes. Since its first description in 1959, the fluorescent dye Thioflavin-T (ThT) has become among the most widely used "gold standards" for selectively staining and identifying amyloid fibrils both in vivo and in vitro. The large enhancement of its fluorescence emission upon binding to fibrils makes ThT a particularly powerful and convenient tool. Despite its widespread use in clinical and basic science applications, the molecular mechanism for the ability of ThT to recognize diverse types of amyloid fibrils and for the dye's characteristic fluorescence has only begun to be elucidated. Here, we review recent progress in the understanding of ThT-fibril interactions at an atomic resolution. These studies have yielded important insights into amyloid structures and the processes of fibril formation, and they also offer guidance for designing the next generation of amyloid assembly diagnostics, inhibitors, and therapeutics. Copyright (c) 2010 Elsevier B.V. All rights reserved.

Spectroscopic determination of tryptophan and tyrosine in proteins.