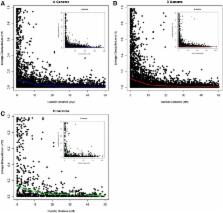 The recently identified Puccinia graminis f. sp. tritici ( Pgt) race TTKSK (Ug99) poses a severe threat to global wheat production because of its broad virulence on several widely deployed resistance genes. Additional virulences have been detected in the Ug99 group of races, and the spread of this race group has been documented across wheat growing regions in Africa, the Middle East (Yemen), and West Asia (Iran). Other broadly virulent Pgt races, such as TRTTF and TKTTF, present further difficulties in maintaining abundant genetic resistance for their effective use in wheat breeding against this destructive fungal disease of wheat. In an effort to identify loci conferring resistance to these races, a genome-wide association study was carried out on a panel of 250 spring wheat breeding lines from the International Maize and Wheat Improvement Center (CIMMYT), six wheat breeding programs in the United States and three wheat breeding programs in Canada.

The lines included in this study were grouped into two major clusters, based on the results of principal component analysis using 23,976 SNP markers. Upon screening for adult plant resistance (APR) to Ug99 during 2013 and 2014 in artificial stem rust screening nurseries at Njoro, Kenya and at Debre Zeit, Ethiopia, several wheat lines were found to exhibit APR. The lines were also screened for resistance at the seedling stage against races TTKSK, TRTTF, and TKTTF at USDA-ARS Cereal Disease Laboratory in St. Paul, Minnesota; and only 9 of the 250 lines displayed seedling resistance to all the races. Using a mixed linear model, 27 SNP markers associated with APR against Ug99 were detected, including markers linked with the known APR gene Sr2. Using the same model, 23, 86, and 111 SNP markers associated with seedling resistance against races TTKSK, TRTTF, and TKTTF were identified, respectively. These included markers linked to the genes Sr8a and Sr11 providing seedling resistance to races TRTTF and TKTTF, respectively. We also identified putatively novel Sr resistance genes on chromosomes 3B, 4D, 5A, 5B, 6A, 7A, and 7B.

Our results demonstrate that the North American wheat breeding lines have several resistance loci that provide APR and seedling resistance to highly virulent Pgt races. Using the resistant lines and the SNP markers identified in this study, marker-assisted resistance breeding can assist in development of varieties with elevated levels of resistance to virulent stem rust races including TTKSK.

Use of unlinked genetic markers to detect population stratification in association studies.

Adam J. Pritchard,  Arlene S. Rosenberg,  Andrew A. Rosenberg (1999)
We examine the issue of population stratification in association-mapping studies. In case-control studies of association, population subdivision or recent admixture of populations can lead to spurious associations between a phenotype and unlinked candidate loci. Using a model of sampling from a structured population, we show that if population stratification exists, it can be detected by use of unlinked marker loci. We show that the case-control-study design, using unrelated control individuals, is a valid approach for association mapping, provided that marker loci unlinked to the candidate locus are included in the study, to test for stratification. We suggest guidelines as to the number of unlinked marker loci to use.

Jose Crossa,  Juan A Burgueño,  Susanne Dreisigacker … (2007)
Linkage disequilibrium can be used for identifying associations between traits of interest and genetic markers. This study used mapped diversity array technology (DArT) markers to find associations with resistance to stem rust, leaf rust, yellow rust, and powdery mildew, plus grain yield in five historical wheat international multienvironment trials from the International Maize and Wheat Improvement Center (CIMMYT). Two linear mixed models were used to assess marker-trait associations incorporating information on population structure and covariance between relatives. An integrated map containing 813 DArT markers and 831 other markers was constructed. Several linkage disequilibrium clusters bearing multiple host plant resistance genes were found. Most of the associated markers were found in genomic regions where previous reports had found genes or quantitative trait loci (QTL) influencing the same traits, providing an independent validation of this approach. In addition, many new chromosome regions for disease resistance and grain yield were identified in the wheat genome. Phenotyping across up to 60 environments and years allowed modeling of genotype x environment interaction, thereby making possible the identification of markers contributing to both additive and additive x additive interaction effects of traits.