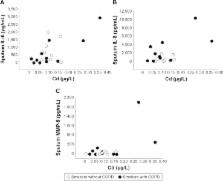 Tobacco contains cadmium, and this metal has been attributed a causative role in pulmonary emphysema among smokers, although extracellular cadmium has not to date been quantified in the bronchoalveolar space of tobacco smokers with or without COPD. We determined whether cadmium is enhanced in the bronchoalveolar space of long-term tobacco smokers with or without COPD in vivo, its association with inflammation, and its effect on chemokine release in macrophage-like cells in vitro. Bronchoalveolar lavage (BAL), sputum, and blood samples were collected from current, long-term smokers with and without COPD and from healthy nonsmokers. Cadmium concentrations were determined in cell-free BAL fluid using inductively coupled plasma mass spectrometry. Blood monocyte-derived macrophages were exposed to cadmium chloride in vitro. Depending upon the type of sample, molecular markers of inflammation were quantified either as protein (enzyme-linked immunosorbent assay) or as mRNA (real-time polymerase chain reaction). Cadmium concentrations were markedly increased in cell-free BAL fluid of smokers compared to that of nonsmokers (n=19–29; P<0.001), irrespective of COPD. In these smokers, the measured cadmium displayed positive correlations with macrophage TNF-α mRNA in BAL, neutrophil and CD8 + cell concentrations in blood, and finally with IL-6, IL-8, and MMP-9 protein in sputum (n=10–20; P<0.05). The cadmium chloride exposure caused a concentration-dependent increase in extracellular IL-8 protein in monocyte-derived macrophages in vitro. In conclusion, extracellular cadmium is enhanced in the bronchoalveolar space of long-term smokers and displays pro-inflammatory features. Its pathogenic role in tobacco-induced disease deserves further evaluation.

Gender differences in the disposition and toxicity of metals.

Sandra Ceccatelli,  Agneta Åkesson,  Marika Berglund … (2007)
There is increasing evidence that health effects of toxic metals differ in prevalence or are manifested differently in men and women. However, the database is small. The present work aims at evaluating gender differences in the health effects of cadmium, nickel, lead, mercury and arsenic. There is a markedly higher prevalence of nickel-induced allergy and hand eczema in women compared to men, mainly due to differences in exposure. Cadmium retention is generally higher in women than in men, and the severe cadmium-induced Itai-itai disease was mainly a woman's disease. Gender differences in susceptibility at lower exposure are uncertain, but recent data indicate that cadmium has estrogenic effects and affect female offspring. Men generally have higher blood lead levels than women. Lead accumulates in bone and increased endogenous lead exposure has been demonstrated during periods of increased bone turnover, particularly in women in pregnancy and menopause. Lead and mercury, in the form of mercury vapor and methylmercury, are easily transferred from the pregnant women to the fetus. Recent data indicate that boys are more susceptible to neurotoxic effects of lead and methylmercury following exposure early in life, while experimental data suggest that females are more susceptible to immunotoxic effects of lead. Certain gender differences in the biotransformation of arsenic by methylation have been reported, and men seem to be more affected by arsenic-related skin effect than women. Experimental studies indicate major gender differences in arsenic-induced cancer. Obviously, research on gender-related differences in health effects caused by metals needs considerable more focus in the future.

Annika M Berglund,  M. Vahter,  T. Åkesson … (2002)
There is a lack of information concerning whether environmental-related health effects are more or less prevalent or manifested differently in women compared to men. Previously, most research in the area of toxicology and environmental and occupational health involved male subjects. The present work aims at reviewing exposure and health effects of cadmium, nickel, lead, mercury, and arsenic manifested differently in women than in men. The gender difference in exposure to nickel results in a much higher prevalence of nickel allergy and hand eczema in women than in men. The internal cadmium dose is generally higher in women than in men, due to a higher gastro-intestinal absorption at low iron stores. This was probably one major reason why Itai-itai disease was mainly a woman's disease. Yet, data are sparse regarding the risk for women relative to men to develop cadmium-induced kidney damage in populations exposed to low levels of cadmium. Lead is accumulated mainly in bone and increased endogenous lead exposure has been demonstrated in women during periods of increased bone turnover, e.g., menopause. Both lead and mercury exposure in pregnant women has to be kept low in order to prevent neurodevelopment effects in the developing fetus and child. Limited data indicate that women are more affected than men following exposure to methylmercury at adult age, while males seem to be more sensitive to exposure during early development. Regarding arsenic, some data indicate gender differences in the biotransformation by methylation, possibly also in susceptibility to certain arsenic-related cancers. Obviously, gender-related differences in exposure and health effects caused by metals are highly neglected research areas, which need considerable focus in the future. (c) 2002 Elsevier Science (USA).

Biological half-time of cadmium in the blood of workers after cessation of exposure.

L Jarup,  K Nogawa,  T Kjellström … (1983)
The biological half-time of cadmium in the blood of previously exposed workers was estimated after the cessation of exposure. Five men were followed for a period of 10 to 13 years. One-compartment and two-compartment exponential elimination models were used to describe the decrease in blood cadmium levels over time. The best fit to the observed data was obtained with a two-compartment model. The half-times estimated from this model ranged from 75 to 128 d for the fast component and from 7.4 to 16.0 years for the slow component. The results confirm that there is a very long whole-body biological half-time for cadmium, and the estimated half-times are similar to those obtained with different methods.