Comparative FISH-mapping of TTAGG telomeric sequences to the chromosomes of leafcutter ants (Formicidae, Myrmicinae): is the insect canonical sequence conserved? 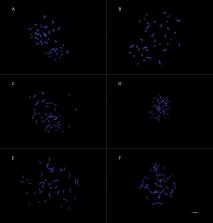 Telomeric sequences are conserved across species. The most common sequence reported among insects is (TTAGG) n, but its universal occurrence is not a consensus because other canonical motifs have been reported. In the present study, we used fluorescence in situ hybridization (FISH) using telomeric probes with (TTAGG) 6 repeats to describe the telomere composition of leafcutter ants. We performed the molecular cytogenetic characterization of six Acromyrmex Mayr, 1865 and one Atta Fabricius, 1804 species ( Acromyrmex ambiguus (Emery, 1888), Ac. crassispinus (Forel, 1909), Ac. lundii (Guérin-Mèneville, 1838), Ac. nigrosetosus (Forel, 1908), Ac. rugosus (Smith, 1858), Ac. subterraneus subterraneus (Forel, 1893), and Atta sexdens (Linnaeus, 1758)) and described it using a karyomorphometric approach on their chromosomes. The diploid chromosome number 2n = 38 was found in all Acromyrmex species, and the karyotypic formulas were as follows: Ac. ambiguus 2K = 14M + 12SM + 8ST + 4A, Ac. crassispinus 2K = 12M + 20SM + 4ST + 2A, Ac. lundii 2K = 10M + 14SM + 10ST + 4A, Ac. nigrosetosus 2K = 12M + 14SM + 10ST + 2A, and Ac. subterraneus subterraneus 2K = 14M + 18SM + 4ST + 2A. The exact karyotypic formula was not established for Ac. rugosus . FISH analyses revealed the telomeric regions in all the chromosomes of the species studied in the present work were marked by the (TTAGG) 6 sequence. These results reinforce the premise that Formicidae presents high homology between their genera for the presence of the canonical sequence (TTAGG) n.

Modes of spontaneous chromosomal mutation and karyotype evolution in ants with reference to the minimum interaction hypothesis.

Charlotte S R Taylor,  H Imai,  M W Crosland … (1988)
Aspects of chromosomal mutation and karyotype evolution in ants are discussed with reference to recently accumulated karyological data, and to detailed karyotype analyses of several species or species complexes with low chromosome number and unusual chromosomal mutations (the complexes of Myrmecia pilosula (Smith) (n = 1, 5 or 9 to 16); M. piliventris Smith (n = 2, 3-4, 17 or 32), and Ponera scabra Wheeler (n = 3 or 4, 2n = 7 or 8). Translocations and Robertsonian polymorphisms are confirmed to be non-randomly distributed among ants -the former are found at high frequencies in species with low chromosome numbers (n less than or equal to 12), while the latter predominate in those with high numbers (n greater than 12). This situation is consistent with the minimum interaction hypothesis of Imai et al. (1986), under which translocations are expected to occur most frequently in low-numbered karyotypes, and that the resulting genetic risks are minimized by increases in chromosome and/or arm numbers through centric fission and pericentric inversion. Centric fusion is considered to be a transient event in karyotype evolution, resulting from telomere instability in acrocentric chromosomes.

The new cytogenetics: blurring the boundaries with molecular biology.

Roderick Carter,  Andrew Carter,  Michael R. Speicher (2005)
Exciting advances in fluorescence in situ hybridization and array-based techniques are changing the nature of cytogenetics, in both basic research and molecular diagnostics. Cytogenetic analysis now extends beyond the simple description of the chromosomal status of a genome and allows the study of fundamental biological questions, such as the nature of inherited syndromes, the genomic changes that are involved in tumorigenesis and the three-dimensional organization of the human genome. The high resolution that is achieved by these techniques, particularly by microarray technologies such as array comparative genomic hybridization, is blurring the traditional distinction between cytogenetics and molecular biology.

TTAGG telomeric repeats in chromosomes of some insects and other arthropods.

W Traut,  K Sahara,  F Marec (1998)
We studied the occurrence of the TTAGG telomere repeats by fluorescence in-situ hybridization (FISH) and Southern hybridization in ten insect species and two other arthropods. (TTAGG)n-containing telomeres were found in three Lepidoptera species, the silkworm Bombyx mori (in which the telomeric sequence was recently discovered), the flour moth Ephestia kuehniella, and the wax moth Galleria mellonella, in one species of Hymenoptera, the honey bee Apis mellifera, in one species of Coleoptera, the bark beetle Ips typographus, in one species of Orthoptera, the locust Locusta migratoria, and in a crustacean, the amphipod Gammarus pulex. They were absent in another species of Coleoptera, the mealworm Tenebrio molitor, two representatives of Diptera, Drosophila melanogaster and Megaselia scalaris, a species of Heteroptera, the bug Pyrrhocoris apterus and a spider, Tegenaria ferruginea. Our results, which confirm and extend earlier observations, suggest that (TTAGG)n was a phylogenetically ancestral telomere motif in the insect lineage but was lost independently in different groups, being replaced probably by other telomere motifs. In the Coleoptera this must have happened rather recently as even members of the same family, Curculionidae, differ with respect to the telomeric DNA.