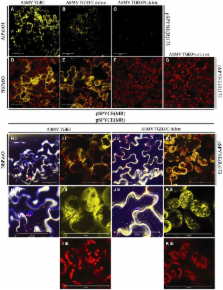 Alternanthera mosaic virus (AltMV) triple gene block 3 (TGB3) protein is involved in viral movement. AltMV TGB3 subcellular localization was previously shown to be distinct from that of Potato virus X (PVX) TGB3, and a chloroplast binding domain identified; veinal necrosis and chloroplast vesiculation were observed in Nicotiana benthamiana when AltMV TGB3 was over-expressed from PVX. Plants with over-expressed TGB3 showed more lethal damage under dark conditions than under light. Yeast-two-hybrid analysis and bimolecular fluorescence complementation (BiFC) reveal that Arabidopsis thaliana PsbO1 has strong interactions with TGB3; N. benthamiana PsbO (NbPsbO) also showed obvious interaction signals with TGB3 through BiFC. These results demonstrate an important role for TGB3 in virus cell-to-cell movement and virus-host plant interactions. The Photosystem II oxygen-evolving complex protein PsbO interaction with TGB3 is presumed to have a crucial role in symptom development and lethal damage under dark conditions. In order to further examine interactions between AtPsbO1, NbPsbO, and TGB3, and to identify the binding domain(s) in TGB3 protein, BiFC assays were performed between AtPsbO1 or NbPsbO and various mutants of TGB3. Interactions with C-terminally deleted TGB3 were significantly weaker than those with wild-type TGB3, and both N-terminally deleted TGB3 and a TGB3 mutant previously shown to lose chloroplast interactions failed to interact detectably with PsbO in BiFC. To gain additional information about TGB3 interactions in AltMV-susceptible plants, we cloned 12 natural AltMV TGB3 sequence variants into a PVX expression vector to examine differences in symptom development in N. benthamiana. Symptom differences were observed on PVX over-expression, with all AltMV TGB3 variants showing more severe symptoms than the WT PVX control, but without obvious correlation to sequence differences.

Michael Goodin,  Steven Ruzin,  Denise Schichnes … (2002)
We have constructed a matched set of binary vectors designated pGD, pGDG and pGDR for the expression and co-localization of native proteins and GFP or DsRed fusions in large numbers of plant cells. The utility of these vectors following agroinfiltration into leaves has been demonstrated with four genes from Sonchus yellow net virus, a plant nucleorhabdovirus, and with a nucleolar marker protein. Of the three SYNV proteins tested, sc4 gave identical localization patterns at the cell wall and nucleus when fused to GFP or DsRed. However, some differences in expression patterns were observed depending on whether DsRed or GFP was the fusion partner. In this regard, the DsRed:P fusion showed a similar pattern of localization to GFP:P, but localized foci appeared in the nucleus and near the periphery of the nucleus. Nevertheless, the viral nucleocapsid protein, expressed as a GFP:N fusion, co-localized with DsRed:P in a subnuclear locale in agreement with our previous observations (Goodin et al., 2001). This locale appears to be distinct from the nucleolus as indicated by co-expression of the N protein, DsRed:P and a nucleolar marker AtFib1 fused to GFP. The SYNV M protein, which is believed to be particularly prone to oligomerization, was detectable only as a GFP fusion. Our results indicate that agroinfiltration with bacteria containing the pGD vectors is extremely useful for transient expression of several proteins in a high proportion of the cells of Nicotiana benthamiana leaves. The GFP and DsRed elements incorporated into the pGD system should greatly increase the ease of visualizing co-localization and interactions of proteins in a variety of experimental dicotyledonous hosts.

Silencing on the spot. Induction and suppression of RNA silencing in the Agrobacterium-mediated transient expression system.

Kirsten Johansen,  Elliot Carrington (2001)
The Agrobacterium-mediated transient expression assay in intact tissues has emerged as a rapid and useful method to analyze genes and gene products in plants. In many cases, high levels of active protein can be produced without the need to produce transgenic plants. In this study, a series of tools were developed to enable strong or weak induction of RNA silencing and to suppress RNA silencing in the absence of stable transgenes. Transient delivery of a gene directing production of a double-stranded green fluorescent protein (GFP) transcript rapidly induced RNA silencing of a codelivered GFP reporter gene, effectively preventing accumulation of GFP protein and mRNA. RNA silencing triggered by the strong dsGFP inducer was partially inhibited by the tobacco etch virus silencing suppressor, P1/HC-Pro. In the absence of the strong double-stranded GFP inducer, the functional GFP gene served as a weak RNA silencing inducer in the transient assay, severely limiting accumulation of the GFP mRNA over time. The weak silencing induced by the GFP gene was suppressed by P1/HC-Pro. These results indicate RNA silencing can be triggered by a variety of inducers and analyzed entirely using transient gene delivery systems. They also indicate that RNA silencing may be a significant limitation to expression of genes in the Agrobacterium-mediated transient assay but that this limitation can be overcome by using RNA silencing suppressors.

Thomas Griebel,  Jürgen Zeier (2008)
We have examined molecular and physiological principles underlying the light dependency of defense activation in Arabidopsis (Arabidopsis thaliana) plants challenged with the bacterial pathogen Pseudomonas syringae. Within a fixed light/dark cycle, plant defense responses and disease resistance significantly depend on the time of day when pathogen contact takes place. Morning and midday inoculations result in higher salicylic acid accumulation, faster expression of pathogenesis-related genes, and a more pronounced hypersensitive response than inoculations in the evening or at night. Rather than to the plants' circadian rhythm, this increased plant defense capability upon day inoculations is attributable to the availability of a prolonged light period during the early plant-pathogen interaction. Moreover, pathogen responses of Arabidopsis double mutants affected in light perception, i.e. cryptochrome1cryptochrome2 (cry1cry2), phototropin1phototropin2 (phot1phot2), and phytochromeAphytochromeB (phyAphyB) were assessed. Induction of defense responses by either avirulent or virulent P. syringae at inoculation sites is relatively robust in leaves of photoreceptor mutants, indicating little cross talk between local defense and light signaling. In addition, the blue-light receptor mutants cry1cry2 and phot1phot2 are both capable of establishing a full systemic acquired resistance (SAR) response. Induction of SAR and salicylic-acid-dependent systemic defense reactions, however, are compromised in phyAphyB mutants. Phytochrome regulation of SAR involves the essential SAR component FLAVIN-DEPENDENT MONOOXYGENASE1. Our findings highlight the importance of phytochrome photoperception during systemic rather than local resistance induction. The phytochrome system seems to accommodate the supply of light energy to the energetically costly increase in whole plant resistance.