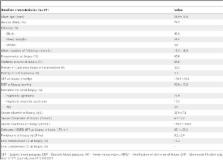 A retrospective study of patients with idiopathic MCGN followed up at our clinic. Seventy-nine patients with no identifiable cause of MCGN were included for analysis. A composite renal outcome of persistent doubling of serum creatinine or end stage renal disease (ESRD) was used. Kaplan Meier survival and Cox regression analysis were used to assess survival and identify factors predicting the outcome.

The outcome of idiopathic MCGN in Cape Town is poor and requires further prospective studies to improve our understanding of this common disease.

The timing of specialist evaluation in chronic kidney disease and mortality.

Lisbeth N Fink,  Kraig Kinchen,  Neil R. Powe … (2002)
Care for chronic renal failure involves management of complications and preparation for possible dialysis. Patients often are not evaluated by nephrologists in a timely manner. To identify factors associated with late evaluation by a nephrologist and to assess whether late evaluation is associated with worse survival once patients develop end-stage renal disease (ESRD). National prospective cohort study. 81 dialysis facilities throughout the United States. 828 patients with new-onset ESRD. Time from first evaluation by a nephrologist to initiation of dialysis, classified as late ( 12 months); rate of death, from initiation of dialysis to an average of 2.2 years of follow-up; and demographic, clinical, and laboratory characteristics. After adjustment for potential confounders, late evaluation was more common among black men than white men (44.8% vs. 24.5%; P < 0.05), uninsured patients than insured patients (56.7% vs. 29.0%; P < 0.05) and patients with severe comorbid disease than those with mild comorbid disease (35.0% vs. 23.0%; P < 0.05). Compared with patients who had early evaluation, the risk for death was greater among patients evaluated late and was graded (hazard ratio, 1.3 [95% CI, 0.87 to 2.06] for patients with intermediate evaluation and 1.8 [CI, 1.21 to 2.61] for those with late evaluation) after adjustment for dialysis method, demographic characteristics, and socioeconomic status in Cox proportional hazards regression analysis. After additional adjustment for such factors as the presence and severity of comorbid conditions, the association remained graded (hazard ratio, 1.2 [CI, 0.73 to 1.82] for patients evaluated at an intermediate point and 1.6 [CI, 1.04 to 2.39] for those evaluated late). Late evaluation of patients with chronic renal failure by a nephrologist is associated with greater burden and severity of comorbid disease, black ethnicity, lack of health insurance, and shorter duration of survival.

Survey of the Italian Registry of Renal Biopsies. Frequency of the renal diseases for 7 consecutive years. The Italian Group of Renal Immunopathology.

F Schena (1997)
This report describes data collected by the Italian Registry of Renal Biopsies (IRRB) (E mail http://www.teseo.it/nephrology/irrb), which includes 15461 renal biopsies (RB) performed over a period of 7 years (1987-1993). From 1987 to 1988, the Registry recorded only the histological diagnosis of 3686 RB, whereas beginning in 1989, additional records (sex, age, clinical symptoms and renal function) were obtained from 11,775 patients undergoing RB. This is the first report on such a large number of RB containing data from 96% of Italian renal units which routinely perform RB. In 13,835 RB performed in native kidneys, two groups of renal diseases, primary (59.9%) and secondary (25.4%) glomerulonephritis (gn), were more frequent than others. Among primary gn, the frequency of cases of IgAN, membranous gn, and focal and segmental glomerulosclerosis were 36.9, 21.7 and 10.4% respectively. Renal disease due to immune-mediated causes (51%) and dysgammaglobulinaemia (26.9%) were the most frequent among secondary gn. In the former group, the frequency of cases with lupus nephritis and vasculitis were 51.6 and 25.9% respectively. Renal amyloidosis (39.3%), essential mixed cryoglobulinaemia (30.9%), and multiple myeloma were the most frequent forms in the latter group. In 1993 the incidence of the following groups of renal disease was: primary gn (22.7 p.m.p.), secondary gn (11.1 p.m.p.) of which immune-mediated gn (5.8 p.m.p.), dysgammaglobulinaemias associated with nephritis (2.4 p.m.p.). IgAN and membranous gn, as primary gn, had an incidence of 8.4 and 4.9 p.m.p, respectively, while lupus nephritis (2.6 p.m.p.) and renal vasculitis (1.6 p.m.p.) were the most frequent forms of secondary gn. Clinical data regarding 10357 RB collected during 5 years (1989-1993), showed that the most common indications to perform RB were urinary abnormalities (30.8%) and nephrotic syndrome (27.1%), followed by recurrent episodes of macrohaematuria (8.7%) and nephritic syndrome (5.4%). Acute renal failure was present in 9.2% of patients and chronic renal insufficiency in 18.8% of cases. Membranous gn (32.9%), focal and segmental glomerulosclerosis (12.3%), and minimal-change disease (12.0%) were the most frequent diagnoses in patients with nephrotic syndrome, while post-streptococcal gn (16.1%) and IgAN (14.0%) were frequent in the nephritic syndrome. IgAN was frequently found in patients with urinary abnormalities (29.8%) and recurrent episodes of macrohematuria (71.4%). Twenty per cent of the acute renal insufficiency cases were secondary to necrotizing vasculitis, while chronic renal failure was present in 16.6% of the IgAN patients. The IRRB is considering to extend its programme to include (i) paediatric section regarding RB from patients aged less than 18 years; (ii) annual review of clinical data concerning the kidney function of selected groups of patients recorded in IRRB, and (iii) the listing of IRRB records on the INTERNET, to facilitate the distribution of information throughout the scientific community.