Ancyronyx clisteri , a new spider riffle beetle species from Borneo, redescription of A. sarawacensis Jäch including a description of the larva and new distribution data for A. procerus Jäch using DNA barcodes (Coleoptera, Elmidae) 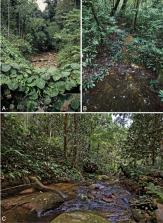 Ancyronyx clisteri sp. nov. ( Coleoptera , Elmidae ) a new spider riffle beetle discovered from northern Borneo (Brunei; Sabah and Sarawak, Malaysia) and the larva of Ancyronyx sarawacensis Jäch are described. Illustrations of the habitus and diagnostic characters of the new species and the similar and highly variable A. sarawacensis are presented. Differences to closely related species, based on DNA barcodes and morphological characters, are discussed. Association of the larva and the imago of A. sarawacensis , and the occurrence of Ancyronyx procerus Jäch in Peninsular Malaysia and Sabah are confirmed by using COI mtDNA sequences.

PAST: paleontologocal statistics software package for education and data analysis.

John. Lawrence,  Adam Slipinski (2013)
This three-volume series represents a comprehensive treatment of the beetles of Australia, a relatively under-studied fauna that includes many unusual and unique lineages found nowhere else on Earth. Volume 1 contains keys to all 117 beetle families found in Australia, and includes over 1100 illustrations of adults, larvae and anatomical structures. This volume is based in part on Lawrence & Britton’s out-of-print Australian Beetles, but is fully updated and expanded. The biology and morphology for all major beetle lineages is described and illustrated, along with anatomical terms which clarify the characters and terminology used in the keys; few other resources for beetle identification include such a detailed morphological background. A chapter on the fossil record is also included, and family sections provide full descriptions of adults and larvae, including the world distribution of each family. The revised identification keys (currently recognised as one of the most valuable keys worldwide) will aid quarantine agents, biologists and students in identifying members of the most species-rich order of animals.

Ancyronyx Erichson, 1847 (Coleoptera, Elmidae) from Mindoro, Philippines, with description of the larvae and two new species using DNA sequences for the assignment of the developmental stages

Hendrik Freitag (2013)
Abstract Ancyronyx buhid sp. n. and Ancyronyx tamaraw sp. n. are described based on adults and larvae, matched using their cox1 or cob DNA sequence data. Additional records of Ancyronyx schillhammeri Jäch, 1994 and Ancyronyx minerva Freitag & Jäch, 2007 from Mindoro are listed. The previously unknown larva of Ancyronyx schillhammeri is also described here, aided by cox1 data. The new species and larval stages are described in detail and illustrated by SEM and stacked microscopic images. Keys to the adult and larval Ancyronyx species of Mindoro and an updated checklist of Philippine Ancyronyx species are provided. The usefulness as bioindicators, the phylogenetic relationships and biogeographic aspects affecting the distribution patterns are briefly discussed.