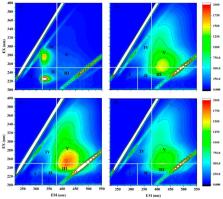 This study investigated the water quality of the groundwater that was collected from the chronic kidney disease of unknown etiology (CKDu) prevailing areas in the dry zone of Sri Lanka to assess its suitability for drinking purposes, and for the first time a Water Quality Index (WQI) with emphasis on proposing appropriate drinking water treatment method was developed. A total of 88 groundwater samples were collected in dry (December 2016) and wet (May 2017) seasons; high concentrations of water hardness, fluoride, salinity, dissolved organic carbon (DOC), and the general alkaline nature of water were the main issues that were observed for disease incidence. The chemical weathering of the underlying bedrock, followed by ion exchange and precipitation processes, primarily controlled groundwater geochemistry. During the 1985–2017 period, the variations of the annual rainfall and temperature were minimal, which suggests no evidence for major climatic changes within the study areas. Almost all of the samples from the CKDu regions show a low alkali hazard and most of the samples show a medium to high salinity hazard. The DOC of the studied samples was mainly composed of the organic fractions in the following order, as fulvic acids > humic acids > aromatic protein II > soluble microbial by-products, and the molecular weights (MW) of these fractions ranged from 100–3000 Da. Based on the water quality index (WQI) calculations, it was found that only 3.8% in the wet season and 2.6% in the dry season of total water samples were categorized as the “excellent” type, and all other water sources require a further treatment before consumption. As there is an urgent need for establishing proper long-term drinking water treatment technology for the CKDu affected area, these findings can be used as benchmark of raw water quality in the design processes of treatment plants.

Diagnosis and Improvement of Saline and Alkali Soils

A graphic procedure in the geochemical interpretation of water-analyses

James A. Milton,  T Nimmi C Athuraliya,  Upul Karunaratne … (2011)
The global prevalence of chronic kidney disease (CKD) of uncertain etiology may be underreported. Community-level epidemiological studies are few due to the lack of national registries and poor focus on the reporting of non-communicable diseases. Here we describe the prevalence of proteinuric-CKD and disease characteristics of three rural populations in the North Central, Central, and Southern Provinces of Sri Lanka. Patients were selected using the random cluster sampling method and those older than 19 years of age were screened for persistent dipstick proteinuria. The prevalence of proteinuric-CKD in the Medawachchiya region (North Central) was 130 of 2600 patients, 68 of 709 patients in the Yatinuwara region (Central), and 66 of 2844 patients in the Hambantota region (Southern). The mean ages of these patients with CKD ranged from 44 to 52 years. Diabetes and long-standing hypertension were the main risk factors of CKD in the Yatinuwara and Hambantota regions. Age, exceeding 60 years, and farming were strongly associated with proteinuric-CKD in the Medawachchiya region; however, major risk factors were uncertain in 87% of these patients. Of these patients, 26 underwent renal biopsy; histology indicated tubulointerstitial disease. Thus, proteinuric-CKD of uncertain etiology is prevalent in the North Central Province of Sri Lanka. In contrast, known risk factors were associated with CKD in the Central and Southern Provinces.