Surgical treatment of an esophageal bronchogenic cyst with massive upper digestive tract hematoma without esophagectomy: a case report and the review of the literature 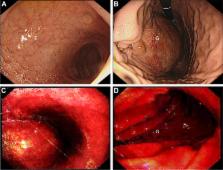 Esophageal bronchogenic cysts are extremely rare. Here we report a case of massive upper digestive tract hematoma and bronchogenic cyst mimicking aortic dissection that was safely removed without esophagectomy. A 30-year-old man was referred to our hospital for the treatment of a mediastinal cystic tumor located in the submucosa of the distal esophagus. His chief complaints were dysphagia > 1 week and severe persistent upper abdominal pain mimicking aortic dissection with constant vomiting for 1 day after gastroscopy examination. The serum level of carbohydrate antigen (CA)199 was > 1,000 U/mL and CA125 was 4,816 U/mL. Hemoglobin levels decreased from 122 g/L to 85 g/L in 5 days. Imaging examinations detected a huge hematoma of the gastric wall. Preoperative diagnosis was difficult. Although the pain indicated a possible aortic dissection, the abnormal levels of tumor biomarkers suggested malignancy. The patient underwent left thoracotomy. The cyst showed an exophytic lesion connected to the esophageal wall at the level of the gastroesophageal junction. Muddy brown contents were obtained by aspiration of the mass intraoperatively. Because enucleation could not be performed, esophageal myotomy in the distal esophagus and partial resection of the cyst were selected. Histopathological examination indicated a bronchogenic cyst of the esophagus. At a follow-up visit 3 months later, the patient had no signs of disease recurrence or any complaints. Postoperative tumor biomarkers returned to normal range. The present report summarizes the clinical details of the case and reviews the literature in order to improve the accuracy of diagnosis.

Clinical spectrum of bronchogenic cysts of the mediastinum and lung in the adult.

C Deschamps,  R Vaillancourt,  J Deslauriers … (1991)
Bronchogenic cysts are closed sacs considered to be the result of an abnormal budding of the respiratory system. They are lined by ciliated epithelium and have focal areas of hyaline cartilage, smooth muscle, and bronchial glands within their walls. They are seldom seen in the adult, and most are thought to be asymptomatic and free of complications. During a 20-year period, 86 patients underwent resection of a bronchogenic cyst of the mediastinum (66 patients) and lung (20 patients). There were 47 women and 39 men whose ages ranged from 16 to 69 years. Seventy-two percent of patients (67% with mediastinal cysts and 90% with cysts of the lung) were symptomatic at the time of operation, and the majority had two or more symptoms. Despite extensive investigations, which in some cases included computed tomographic scanning (n = 12) and angiography (n = 22), a positive diagnosis was never made preoperatively even if it was suspected in 57% of patients. In nearly all patients, the operative approach was that of a posterolateral thoracotomy. All but two mediastinal bronchogenic cysts could be locally excised, but all bronchogenic cysts of the lung required pulmonary resection (lobectomy, 13; limited resection, 6; pneumonectomy, 1). Major operative difficulties were encountered in 35 patients, all of whom were symptomatic preoperatively. Thirty-three patients had a complicated cyst; the complications consisted of fistulization (n = 16), ulcerations of the cyst wall (n = 13), hemorrhage (n = 2), infection without fistulization (n = 1), and secondary bronchial atresia (n = 1). Overall, 82% of patients had a bronchogenic cyst that was either symptomatic or complicated or both.(ABSTRACT TRUNCATED AT 250 WORDS)

Bronchogenic cysts of the mediastinum.

M Copin,  B Gosselin,  M Ribet (1995)
During a 25-year period 69 patients whose ages ranged from 1 day to 64 years were treated for bronchogenic cyst of the mediastinum. The male-to-female sex ratio was 1:0.76. The cysts were symptomatic in 63.7%, compressive in 43.4%, and life threatening in 2.8% of cases. Symptoms and signs of compression were more frequent in infants and children than in adults. Such symptoms and signs were more dependent on the location of the cyst than on its volume. The preoperative diagnosis was wrong in 16% of cases. The cysts were approached through thoracotomy in 67 cases, including one conversion from thoracoscopy, and through cervicotomy and mediastinoscopy in one case each. The cysts opened into the respiratory tract in five cases. No communication with the esophageal lumen was observed. The cystic contents were apparently infected in three cases, but samples remained sterile at culture. There was one hospital death caused by a centrally located compressive cyst that was undiagnosed at thoracotomy. The postoperative morbidity rate was 13.4%. There were no further symptoms after operation in children, but five adults reported continuing pain or dyspnea. Resection of bronchogenic cysts is recommended because of uncertainties in diagnosis and in evolution.

Pulmonary and mediastinal bronchogenic cysts: a clinicopathologic study of 33 cases.

Faten Limaiem,  Aïda Ayadi-Kaddour,  Habiba Djilani … (2015)
Bronchogenic cysts are uncommon congenital anomalies of foregut origin and usually located within the mediastinum and the lung. A retrospective study of 33 thoracic bronchogenic cysts was undertaken to detail their clinicopathologic and radiologic features. There were 18 male and 15 female patients between 12 and 77 years of age with a mean age of 41 years. Thirty-one patients (94%) were symptomatic at the time of diagnosis and the chief complaint was chest pain (48.5%). Most of the cysts presented as homogeneous water-density shadows on standard chest radiographs. The location was intrapulmonary in 25 cases and mediastinal in 8 cases. Based on radiologic investigations, preoperative diagnosis of bronchogenic cyst was made in only 11 cases (33.34%). Surgical excision of the cyst was approached via thoracotomy in 32 cases and thoracoscopy in one case. Total excision of the cyst was performed in 31 cases and subtotal resection in 2 cases. Pathologic findings were consistent with bronchogenic cyst in all cases. During the follow-up period, which ranged between 1 month and 51 months, all patients were symptom-free with no evidence of recurrence. Complete surgical resection is recommended for all bronchogenic cysts to establish diagnosis, alleviate symptoms, and prevent complications.