Concepts and Methods to Access Novel Antibiotics from Actinomycetes 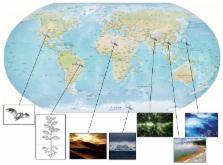 Actinomycetes have been proven to be an excellent source of secondary metabolites for more than half a century. Exhibiting various bioactivities, they provide valuable approved drugs in clinical use. Most microorganisms are still untapped in terms of their capacity to produce secondary metabolites, since only a small fraction can be cultured in the laboratory. Thus, improving cultivation techniques to extend the range of secondary metabolite producers accessible under laboratory conditions is an important first step in prospecting underexplored sources for the isolation of novel antibiotics. Currently uncultured actinobacteria can be made available by bioprospecting extreme or simply habitats other than soil. Furthermore, bioinformatic analysis of genomes reveals most producers to harbour many more biosynthetic gene clusters than compounds identified from any single strain, which translates into a silent biosynthetic potential of the microbial world for the production of yet unknown natural products. This review covers discovery strategies and innovative methods recently employed to access the untapped reservoir of natural products. The focus is the order of actinomycetes although most approaches are similarly applicable to other microbes. Advanced cultivation methods, genomics- and metagenomics-based approaches, as well as modern metabolomics-inspired methods are highlighted to emphasise the interplay of different disciplines to improve access to novel natural products.

Complete genome sequence of the model actinomycete Streptomyces coelicolor A3(2).

S Bentley,  K Chater,  A.-M. Cerdeño-Tárraga … (2002)
Streptomyces coelicolor is a representative of the group of soil-dwelling, filamentous bacteria responsible for producing most natural antibiotics used in human and veterinary medicine. Here we report the 8,667,507 base pair linear chromosome of this organism, containing the largest number of genes so far discovered in a bacterium. The 7,825 predicted genes include more than 20 clusters coding for known or predicted secondary metabolites. The genome contains an unprecedented proportion of regulatory genes, predominantly those likely to be involved in responses to external stimuli and stresses, and many duplicated gene sets that may represent 'tissue-specific' isoforms operating in different phases of colonial development, a unique situation for a bacterium. An ancient synteny was revealed between the central 'core' of the chromosome and the whole chromosome of pathogens Mycobacterium tuberculosis and Corynebacterium diphtheriae. The genome sequence will greatly increase our understanding of microbial life in the soil as well as aiding the generation of new drug candidates by genetic engineering.

Satoshi Tanaka,  Takeshi Ara,  Kazuki Saito … (2010)
MassBank is the first public repository of mass spectra of small chemical compounds for life sciences (<3000 Da). The database contains 605 electron-ionization mass spectrometry (EI-MS), 137 fast atom bombardment MS and 9276 electrospray ionization (ESI)-MS(n) data of 2337 authentic compounds of metabolites, 11 545 EI-MS and 834 other-MS data of 10,286 volatile natural and synthetic compounds, and 3045 ESI-MS(2) data of 679 synthetic drugs contributed by 16 research groups (January 2010). ESI-MS(2) data were analyzed under nonstandardized, independent experimental conditions. MassBank is a distributed database. Each research group provides data from its own MassBank data servers distributed on the Internet. MassBank users can access either all of the MassBank data or a subset of the data by specifying one or more experimental conditions. In a spectral search to retrieve mass spectra similar to a query mass spectrum, the similarity score is calculated by a weighted cosine correlation in which weighting exponents on peak intensity and the mass-to-charge ratio are optimized to the ESI-MS(2) data. MassBank also provides a merged spectrum for each compound prepared by merging the analyzed ESI-MS(2) data on an identical compound under different collision-induced dissociation conditions. Data merging has significantly improved the precision of the identification of a chemical compound by 21-23% at a similarity score of 0.6. Thus, MassBank is useful for the identification of chemical compounds and the publication of experimental data. 2010 John Wiley & Sons, Ltd.

Kai Blin,  Thomas Wolf,  Marc Chevrette … (2017)
Abstract Many antibiotics, chemotherapeutics, crop protection agents and food preservatives originate from molecules produced by bacteria, fungi or plants. In recent years, genome mining methodologies have been widely adopted to identify and characterize the biosynthetic gene clusters encoding the production of such compounds. Since 2011, the ‘antibiotics and secondary metabolite analysis shell—antiSMASH’ has assisted researchers in efficiently performing this, both as a web server and a standalone tool. Here, we present the thoroughly updated antiSMASH version 4, which adds several novel features, including prediction of gene cluster boundaries using the ClusterFinder method or the newly integrated CASSIS algorithm, improved substrate specificity prediction for non-ribosomal peptide synthetase adenylation domains based on the new SANDPUMA algorithm, improved predictions for terpene and ribosomally synthesized and post-translationally modified peptides cluster products, reporting of sequence similarity to proteins encoded in experimentally characterized gene clusters on a per-protein basis and a domain-level alignment tool for comparative analysis of trans-AT polyketide synthase assembly line architectures. Additionally, several usability features have been updated and improved. Together, these improvements make antiSMASH up-to-date with the latest developments in natural product research and will further facilitate computational genome mining for the discovery of novel bioactive molecules.