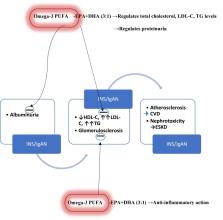 IgA nephropathy (IgAN) is the most prevalent glomerular disease in young adults worldwide, while idiopathic nephrotic syndrome (INS) represents the most frequent manifestation of glomerular disease in childhood. Over the years, studies have speculated about the potential benefits of omega-3 polyunsaturated fatty acids (PUFAs) in improving morbidity in both forms of chronic kidney disease (CKD). The proposed mechanisms of action include reduction of proteinuria and modulation of dyslipidemia. Although in vitro and in vivo experimental studies report the suppressive effect of omega-3 PUFAs on inflammatory pathways linked with the progression of nephropathy, the evidence supporting their beneficial effect in IgAN and INS is still weak. Also, their ability to regulate levels of total cholesterol, low-density lipoprotein-cholesterol (LDL-C), and triglycerides (TG) suggests that they could delay both dyslipidemia-associated nephrotoxicity and atherosclerosis. Most of the clinical trials that were conducted on their therapeutic benefits in IgAN patients reported positive outcomes with low and high doses of omega-3 PUFAs. However, few of the trials noted inconclusive findings, with low-quality evidence suggesting potential improvements in surrogate renal function outcomes. If the beneficial effect of omega-3 PUFAs is predicated on their hypolipidemic action, much higher doses could be used in well-designed randomized-controlled trials (RCTs) to determine if they could produce better renal function outcomes and provide much stronger evidence of their therapeutic benefits in IgAN and INS. However, the current hypothetical mechanisms of action in these forms of CKD also include the effect of omega-3 PUFAs on renal inflammatory pathways and glomerular proteinuria. Perhaps, the unresolved therapeutic efficacy of these fatty acids in IgAN and INS suggests that their exact mechanisms of action are yet to be fully established. In this narrative review, we aim to appraise the current evidence of their potential therapeutic benefits in these diseases.

The commonest glomerulonephritis in the world: IgA nephropathy.

G D'Amico (2000)
Idiopathic immunoglobulin A nephropathy is characterized by an extreme variability in clinical course and sometimes by the unpredictability of the ultimate outcome. Among the numerous studies published in the last 15 years that have calculated the actuarial renal survival and tried to individuate the prognostic role of the clinical and histological features present at the onset of the disease or the time of biopsy, we chose to analyze critically the results of the most valid (30 studies). Actuarial renal survival at 10 years in adults was between 80% and 85% in most of the European and Asian studies, but it was less in studies from the United States and exceeded 90% in the few studies of children. Concordance existed in this selected literature that impairment of renal function, severe proteinuria, and arterial hypertension are the strongest and more reliable clinical predictors of an unfavorable outcome. However, analysis of the prognostic value of morphological lesions was more difficult because they have been characterized in some studies using an overall score or histological classes of progressively more severe involvement and, in others, using a semiquantitative grading of individual glomerular, tubular, interstitial, and vascular changes. In adult patients, a high score of glomerular and tubulointerstitial lesions, corresponding to classes IV and V of the Lee or Haas classifications, predicted a more rapid progression. When single lesions were analyzed separately, glomerulosclerosis and interstitial fibrosis appeared to be the strongest, most reliable predictors of unfavorable prognosis. More controversial was the role of crescents and capsular adhesions. None of the immunohistological features was found to be a risk factor for progression in the more accurate statistical analyses. The same histological features predicted outcome in children, although the severity of lesions at the time of biopsy was usually less than that in adults. However, in the single patient, even the evaluation of these prognostic markers sometimes fails to correctly predict outcome, probably because of the heterogeneity of the disease and the discontinuous activity of some injuring mechanisms during its course.