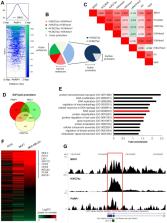 BRG1, an active subunit of the SWI/SNF chromatin-remodeling complex, enables the EP300-dependent transcription of proliferation and DNA repair genes from their E2F/CpG-driven promoters in breast cancer cells. In the current study, we show that BRG1–EP300 complexes are accompanied by poly-ADP-ribose polymerase 1 (PARP1), which emerges as the functional component of the promoter-bound multiprotein units that are capable of controlling gene expression. This enzyme is co-distributed with BRG1 at highly acetylated promoters of genes such as CDK4, LIG1, or NEIL3, which are responsible for cancer cell growth and the removal of DNA damage. ADP-ribosylation is necessary to maintain active transcription, since it ensures an open chromatin structure that allows high acetylation and low histone density. PARP1-mediated modification of BRG1 and EP300 does not affect the association of enzymes with gene promoters; however, it does activate EP300, which acetylates nucleosomes, leading to their eviction by BRG1, thus allowing mRNA synthesis. Although PARP1 was found at BRG1 positive/H3K27ac negative promoters of highly expressed genes in a transformed breast cancer cell line, its transcriptional activity was limited to genes simultaneously controlled by BRG1 and EP300, indicating that the ADP-ribosylation of EP300 plays a dominant role in the regulation of BRG1–EP300-driven transcription. In conclusion, PARP1 directs the transcription of some proliferation and DNA repair genes in breast cancer cells by the ADP-ribosylation of EP300, thereby causing its activation and marking nucleosomes for displacement by BRG1. PARP1 in rapidly dividing cells facilitates the expression of genes that confer a cancer cell phenotype. Our study shows a new mechanism that links PARP1 with the removal of DNA damage in breast cancer cells via the regulation of BRG1–EP300-dependent transcription of genes involved in DNA repair pathways.

BEDTools: a flexible suite of utilities for comparing genomic features

Aaron Quinlan,  Ira Hall (2010)
Motivation: Testing for correlations between different sets of genomic features is a fundamental task in genomics research. However, searching for overlaps between features with existing web-based methods is complicated by the massive datasets that are routinely produced with current sequencing technologies. Fast and flexible tools are therefore required to ask complex questions of these data in an efficient manner. Results: This article introduces a new software suite for the comparison, manipulation and annotation of genomic features in Browser Extensible Data (BED) and General Feature Format (GFF) format. BEDTools also supports the comparison of sequence alignments in BAM format to both BED and GFF features. The tools are extremely efficient and allow the user to compare large datasets (e.g. next-generation sequencing data) with both public and custom genome annotation tracks. BEDTools can be combined with one another as well as with standard UNIX commands, thus facilitating routine genomics tasks as well as pipelines that can quickly answer intricate questions of large genomic datasets. Availability and implementation: BEDTools was written in C++. Source code and a comprehensive user manual are freely available at http://code.google.com/p/bedtools Contact: aaronquinlan@gmail.com; imh4y@virginia.edu Supplementary information: Supplementary data are available at Bioinformatics online.

Cole Trapnell,  Brian Williams,  Geo M Pertea … (2011)
High-throughput mRNA sequencing (RNA-Seq) holds the promise of simultaneous transcript discovery and abundance estimation 1-3 . We introduce an algorithm for transcript assembly coupled with a statistical model for RNA-Seq experiments that produces estimates of abundances. Our algorithms are implemented in an open source software program called Cufflinks. To test Cufflinks, we sequenced and analyzed more than 430 million paired 75bp RNA-Seq reads from a mouse myoblast cell line representing a differentiation time series. We detected 13,692 known transcripts and 3,724 previously unannotated ones, 62% of which are supported by independent expression data or by homologous genes in other species. Analysis of transcript expression over the time series revealed complete switches in the dominant transcription start site (TSS) or splice-isoform in 330 genes, along with more subtle shifts in a further 1,304 genes. These dynamics suggest substantial regulatory flexibility and complexity in this well-studied model of muscle development.

deepTools2: a next generation web server for deep-sequencing data analysis

Fidel Ramírez,  Devon P Ryan,  Björn Grüning … (2016)
We present an update to our Galaxy-based web server for processing and visualizing deeply sequenced data. Its core tool set, deepTools, allows users to perform complete bioinformatic workflows ranging from quality controls and normalizations of aligned reads to integrative analyses, including clustering and visualization approaches. Since we first described our deepTools Galaxy server in 2014, we have implemented new solutions for many requests from the community and our users. Here, we introduce significant enhancements and new tools to further improve data visualization and interpretation. deepTools continue to be open to all users and freely available as a web service at deeptools.ie-freiburg.mpg.de. The new deepTools2 suite can be easily deployed within any Galaxy framework via the toolshed repository, and we also provide source code for command line usage under Linux and Mac OS X. A public and documented API for access to deepTools functionality is also available.