Condensin-mediated remodeling of the mitotic chromatin landscape in fission yeast 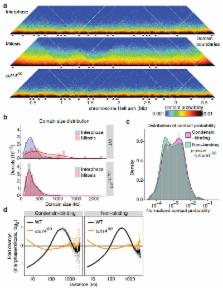 The eukaryotic genome consists of DNA molecules far longer than the cells that contain them. They reach their greatest compaction during chromosome condensation in mitosis. This process is aided by condensin, a ‘Structural Maintenance of Chromosomes’ (SMC) family member 1, 2. The spatial organization of mitotic chromosomes and how condensin shapes chromatin architecture are not yet understood. Here, we use chromosome conformation capture (Hi-C) 3, 4 to study mitotic chromosome condensation in the fission yeast S. pombe 5– 7. This revealed that the interphase landscape characterized by small chromatin domains is replaced by fewer but larger domains in mitosis. Condensin achieves this by setting up longer-range, intra-chromosomal DNA interactions which compact and individualize chromosomes. At the same time, local chromatin contacts are constrained by condensin, with profound implications for local chromatin function during mitosis. Our results reveal condensin as a major determinant that changes the chromatin landscape as cells prepare their genomes for cell division.

Natalia Naumova, Maxim Imakaev, Geoffrey Fudenberg … (2013)
Mitotic chromosomes are among the most recognizable structures in the cell, yet for over a century their internal organization remains largely unsolved. We applied chromosome conformation capture methods, 5C and Hi-C, across the cell cycle and revealed two distinct three-dimensional folding states of the human genome. We show that the highly compartmentalized and cell type-specific organization described previously for nonsynchronous cells is restricted to interphase. In metaphase, we identified a homogenous folding state that is locus-independent, common to all chromosomes, and consistent among cell types, suggesting a general principle of metaphase chromosome organization. Using polymer simulations, we found that metaphase Hi-C data are inconsistent with classic hierarchical models and are instead best described by a linearly organized longitudinally compressed array of consecutive chromatin loops.

SMC complexes: from DNA to chromosomes.

Frank Uhlmann (2016)
SMC (structural maintenance of chromosomes) complexes - which include condensin, cohesin and the SMC5-SMC6 complex - are major components of chromosomes in all living organisms, from bacteria to humans. These ring-shaped protein machines, which are powered by ATP hydrolysis, topologically encircle DNA. With their ability to hold more than one strand of DNA together, SMC complexes control a plethora of chromosomal activities. Notable among these are chromosome condensation and sister chromatid cohesion. Moreover, SMC complexes have an important role in DNA repair. Recent mechanistic insight into the function and regulation of these universal chromosomal machines enables us to propose molecular models of chromosome structure, dynamics and function, illuminating one of the fundamental entities in biology.