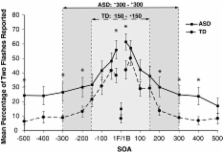 Autism spectrum disorders (ASD) form a continuum of neurodevelopmental disorders, characterized by deficits in communication and reciprocal social interaction, as well as by repetitive behaviors and restricted interests. Sensory disturbances are also frequently reported in clinical and autobiographical accounts. However, surprisingly few empirical studies have characterized the fundamental features of sensory and multisensory processing in ASD. The current study is structured to test for potential differences in multisensory temporal function in ASD by making use of a temporally dependent, low-level multisensory illusion. In this illusion, the presentation of a single flash of light accompanied by multiple sounds often results in the illusory perception of multiple flashes. By systematically varying the temporal structure of the audiovisual stimuli, a “temporal window” within which these stimuli are likely to be bound into a single perceptual entity can be defined. The results of this study revealed that children with ASD report the flash-beep illusion over an extended range of stimulus onset asynchronies relative to children with typical development, suggesting that children with ASD have altered multisensory temporal function. These findings provide valuable new insights into our understanding of sensory processing in ASD and may hold promise for the development of more sensitive diagnostic measures and improved remediation strategies.

David Alais,  David Burr (2004)
Ventriloquism is the ancient art of making one's voice appear to come from elsewhere, an art exploited by the Greek and Roman oracles, and possibly earlier. We regularly experience the effect when watching television and movies, where the voices seem to emanate from the actors' lips rather than from the actual sound source. Originally, ventriloquism was explained by performers projecting sound to their puppets by special techniques, but more recently it is assumed that ventriloquism results from vision "capturing" sound. In this study we investigate spatial localization of audio-visual stimuli. When visual localization is good, vision does indeed dominate and capture sound. However, for severely blurred visual stimuli (that are poorly localized), the reverse holds: sound captures vision. For less blurred stimuli, neither sense dominates and perception follows the mean position. Precision of bimodal localization is usually better than either the visual or the auditory unimodal presentation. All the results are well explained not by one sense capturing the other, but by a simple model of optimal combination of visual and auditory information.

J. Rubenstein,  M M Merzenich (2003)
Autism is a severe neurobehavioral syndrome, arising largely as an inherited disorder, which can arise from several diseases. Despite recent advances in identifying some genes that can cause autism, its underlying neurological mechanisms are uncertain. Autism is best conceptualized by considering the neural systems that may be defective in autistic individuals. Recent advances in understanding neural systems that process sensory information, various types of memories and social and emotional behaviors are reviewed and compared with known abnormalities in autism. Then, specific genetic abnormalities that are linked with autism are examined. Synthesis of this information leads to a model that postulates that some forms of autism are caused by an increased ratio of excitation/inhibition in sensory, mnemonic, social and emotional systems. The model further postulates that the increased ratio of excitation/inhibition can be caused by combinatorial effects of genetic and environmental variables that impinge upon a given neural system. Furthermore, the model suggests potential therapeutic interventions.

Illusions. What you see is what you hear.