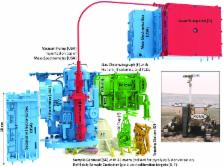 The Mars Organic Molecule Analyzer (MOMA) instrument onboard the ESA/Roscosmos ExoMars rover (to launch in July, 2020) will analyze volatile and refractory organic compounds in martian surface and subsurface sediments. In this study, we describe the design, current status of development, and analytical capabilities of the instrument. Data acquired on preliminary MOMA flight-like hardware and experimental setups are also presented, illustrating their contribution to the overall science return of the mission. Key Words: Mars—Mass spectrometry—Life detection—Planetary instrumentation. Astrobiology 17, 655–685.

Detection of perchlorate and the soluble chemistry of martian soil at the Phoenix lander site.

M Hecht,  Samuel Kounaves,  R. C. Quinn … (2009)
The Wet Chemistry Laboratory on the Phoenix Mars Lander performed aqueous chemical analyses of martian soil from the polygon-patterned northern plains of the Vastitas Borealis. The solutions contained approximately 10 mM of dissolved salts with 0.4 to 0.6% perchlorate (ClO4) by mass leached from each sample. The remaining anions included small concentrations of chloride, bicarbonate, and possibly sulfate. Cations were dominated by Mg2+ and Na+, with small contributions from K+ and Ca2+. A moderately alkaline pH of 7.7 +/- 0.5 was measured, consistent with a carbonate-buffered solution. Samples analyzed from the surface and the excavated boundary of the approximately 5-centimeter-deep ice table showed no significant difference in soluble chemistry.

Mark Sephton (2002)
The carbonaceous chondrite meteorites are fragments of asteroids that have remained relatively unprocessed since the formation of the solar system 4.6 billion years ago. These carbon-rich objects contain a variety of extraterrestrial organic molecules that constitute a record of chemical evolution prior to the origin of life. Compound classes include aliphatic hydrocarbons, aromatic hydrocarbons, amino acids, carboxylic acids, sulfonic acids, phosphonic acids, alcohols, aldehydes, ketones, sugars, amines, amides, nitrogen heterocycles, sulfur heterocycles and a relatively abundant high molecular weight macromolecular material. Structural and stable isotopic characteristics suggest that a number of environments may have contributed to the organic inventory, including interstellar space, the solar nebula and the asteroidal meteorite parent body. This review covers work published between 1950 and the present day and cites 193 references.

This Open Access article is distributed under the terms of the Creative Commons License ( http://creativecommons.org/licenses/by/4.0), which permits unrestricted use, distribution, and reproduction in any medium, provided the original work is properly credited.