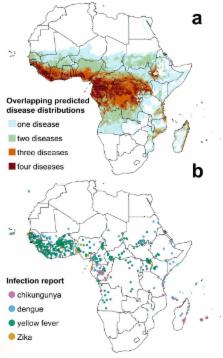 The Zika crisis drew attention to the long-overlooked problem of arboviruses transmitted by Aedes mosquitoes in Africa. Yellow fever, dengue, chikungunya and Zika are poorly controlled in Africa and often go unrecognized. However, to combat these diseases, both in Africa and worldwide, it is crucial that this situation changes. Here, we review available data on the distribution of each disease in Africa, their Aedes vectors, transmission potential, and challenges and opportunities for Aedes control. Data on disease and vector ranges are sparse, and consequently maps of risk are uncertain. Issues such as genetic and ecological diversity, and opportunities for integration with malaria control, are primarily African; others such as ever-increasing urbanization, insecticide resistance and lack of evidence for most control-interventions reflect problems throughout the tropics. We identify key knowledge gaps and future research areas, and in particular, highlight the need to improve knowledge of the distributions of disease and major vectors, insecticide resistance, and to develop specific plans and capacity for arboviral disease surveillance, prevention and outbreak responses.

Dengue, Urbanization and Globalization: The Unholy Trinity of the 21st Century

Duane J. Gubler (2011)
Dengue is the most important arboviral disease of humans with over half of the world’s population living in areas of risk. The frequency and magnitude of epidemic dengue have increased dramatically in the past 40 years as the viruses and the mosquito vectors have both expanded geographically in the tropical regions of the world. There are many factors that have contributed to this emergence of epidemic dengue, but only three have been the principal drivers: 1) urbanization, 2) globalization and 3) lack of effective mosquito control. The dengue viruses have fully adapted to a human-Aedes aegypti-human transmission cycle, in the large urban centers of the tropics, where crowded human populations live in intimate association with equally large mosquito populations. This setting provides the ideal home for maintenance of the viruses and the periodic generation of epidemic strains. These cities all have modern airports through which 10s of millions of passengers pass each year, providing the ideal mechanism for transportation of viruses to new cities, regions and continents where there is little or no effective mosquito control. The result is epidemic dengue. This paper discusses this unholy trinity of drivers, along with disease burden, prevention and control and prospects for the future.

Catherine Moyes,  John Vontas,  Ademir Martins … (2017)
Both Aedes aegytpi and Ae. albopictus are major vectors of 5 important arboviruses (namely chikungunya virus, dengue virus, Rift Valley fever virus, yellow fever virus, and Zika virus), making these mosquitoes an important factor in the worldwide burden of infectious disease. Vector control using insecticides coupled with larval source reduction is critical to control the transmission of these viruses to humans but is threatened by the emergence of insecticide resistance. Here, we review the available evidence for the geographical distribution of insecticide resistance in these 2 major vectors worldwide and map the data collated for the 4 main classes of neurotoxic insecticide (carbamates, organochlorines, organophosphates, and pyrethroids). Emerging resistance to all 4 of these insecticide classes has been detected in the Americas, Africa, and Asia. Target-site mutations and increased insecticide detoxification have both been linked to resistance in Ae. aegypti and Ae. albopictus but more work is required to further elucidate metabolic mechanisms and develop robust diagnostic assays. Geographical distributions are provided for the mechanisms that have been shown to be important to date. Estimating insecticide resistance in unsampled locations is hampered by a lack of standardisation in the diagnostic tools used and by a lack of data in a number of regions for both resistance phenotypes and genotypes. The need for increased sampling using standard methods is critical to tackle the issue of emerging insecticide resistance threatening human health. Specifically, diagnostic doses and well-characterised susceptible strains are needed for the full range of insecticides used to control Ae. aegypti and Ae. albopictus to standardise measurement of the resistant phenotype, and calibrated diagnostic assays are needed for the major mechanisms of resistance.