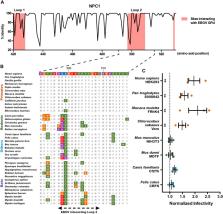 The magnitude of the 2013–2016 Ebola virus disease (EVD) epidemic enabled an unprecedented number of viral mutations to occur over successive human-to-human transmission events, increasing the probability that adaptation to the human host occurred during the outbreak. We investigated one nonsynonymous mutation, Ebola virus (EBOV) glycoprotein (GP) mutant A82V, for its effect on viral infectivity. This mutation, located at the NPC1-binding site on EBOV GP, occurred early in the 2013–2016 outbreak and rose to high frequency. We found that GP-A82V had heightened ability to infect primate cells, including human dendritic cells. The increased infectivity was restricted to cells that have primate-specific NPC1 sequences at the EBOV interface, suggesting that this mutation was indeed an adaptation to the human host. GP-A82V was associated with increased mortality, consistent with the hypothesis that the heightened intrinsic infectivity of GP-A82V contributed to disease severity during the EVD epidemic. 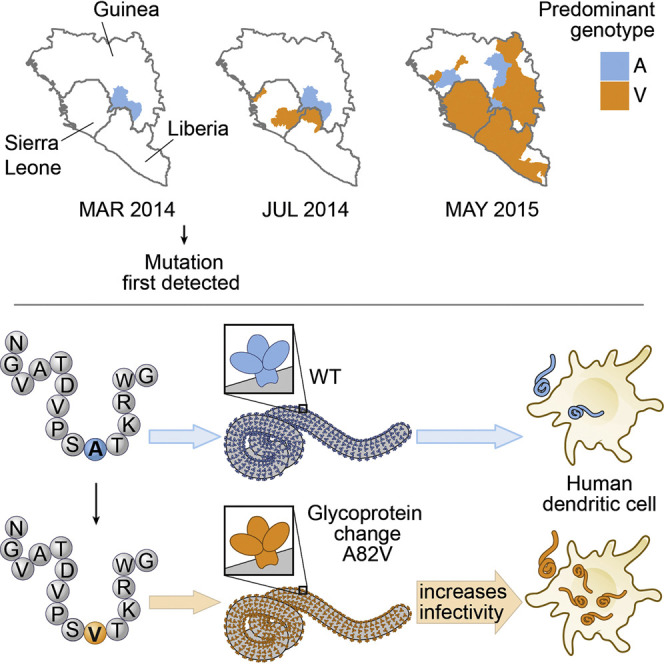 Structure and receptor specificity of the hemagglutinin from an H5N1 influenza virus.

James Stevens,  Terrence Tumpey,  James C. Paulson … (2006)
The hemagglutinin (HA) structure at 2.9 angstrom resolution, from a highly pathogenic Vietnamese H5N1 influenza virus, is more related to the 1918 and other human H1 HAs than to a 1997 duck H5 HA. Glycan microarray analysis of this Viet04 HA reveals an avian alpha2-3 sialic acid receptor binding preference. Introduction of mutations that can convert H1 serotype HAs to human alpha2-6 receptor specificity only enhanced or reduced affinity for avian-type receptors. However, mutations that can convert avian H2 and H3 HAs to human receptor specificity, when inserted onto the Viet04 H5 HA framework, permitted binding to a natural human alpha2-6 glycan, which suggests a path for this H5N1 virus to gain a foothold in the human population.

Early alterations of the receptor-binding properties of H1, H2, and H3 avian influenza virus hemagglutinins after their introduction into mammals.

Y. Kawaoka,  I Donatelli,  M N Matrosovich … (2000)
Interspecies transmission of influenza A viruses circulating in wild aquatic birds occasionally results in influenza outbreaks in mammals, including humans. To identify early changes in the receptor binding properties of the avian virus hemagglutinin (HA) after interspecies transmission and to determine the amino acid substitutions responsible for these alterations, we studied the HAs of the initial isolates from the human pandemics of 1957 (H2N2) and 1968 (H3N2), the European swine epizootic of 1979 (H1N1), and the seal epizootic of 1992 (H3N3), all of which were caused by the introduction of avian virus HAs into these species. The viruses were assayed for their ability to bind the synthetic sialylglycopolymers 3'SL-PAA and 6'SLN-PAA, which contained, respectively, 3'-sialyllactose (the receptor determinant preferentially recognized by avian influenza viruses) and 6'-sialyl(N-acetyllactosamine) (the receptor determinant for human viruses). Avian and seal viruses bound 6'SLN-PAA very weakly, whereas the earliest available human and swine epidemic viruses bound this polymer with a higher affinity. For the H2 and H3 strains, a single mutation, 226Q-->L, increased binding to 6'SLN-PAA, while among H1 swine viruses, the 190E-->D and 225G-->E mutations in the HA appeared important for the increased affinity of the viruses for 6'SLN-PAA. Amino acid substitutions at positions 190 and 225 with respect to the avian virus consensus sequence are also present in H1 human viruses, including those that circulated in 1918, suggesting that substitutions at these positions are important for the generation of H1 human pandemic strains. These results show that the receptor-binding specificity of the HA is altered early after the transmission of an avian virus to humans and pigs and, therefore, may be a prerequisite for the highly effective replication and spread which characterize epidemic strains.

John Obenauer,  Kunal K. Mehta,  Sydney Finkelstein … (2006)
The spread of H5N1 avian influenza viruses (AIVs) from China to Europe has raised global concern about their potential to infect humans and cause a pandemic. In spite of their substantial threat to human health, remarkably little AIV whole-genome information is available. We report here a preliminary analysis of the first large-scale sequencing of AIVs, including 2196 AIV genes and 169 complete genomes. We combine this new information with public AIV data to identify new gene alleles, persistent genotypes, compensatory mutations, and a potential virulence determinant.