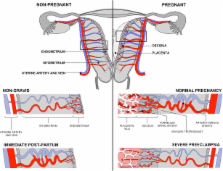 Physiological conversion of the maternal spiral arteries is key to a successful human pregnancy. It involves loss of smooth muscle and the elastic lamina from the vessel wall as far as the inner third of the myometrium, and is associated with a 5–10-fold dilation at the vessel mouth. Failure of conversion accompanies common complications of pregnancy, such as early-onset preeclampsia and fetal growth restriction. Here, we model the effects of terminal dilation on inflow of blood into the placental intervillous space at term, using dimensions in the literature derived from three-dimensional reconstructions. We observe that dilation slows the rate of flow from 2 to 3 m/s in the non-dilated part of an artery of 0.4–0.5 mm diameter to approximately 10 cm/s at the 2.5 mm diameter mouth, depending on the exact radius and viscosity. This rate predicts a transit time through the intervillous space of approximately 25 s, which matches observed times closely. The model shows that in the absence of conversion blood will enter the intervillous space as a turbulent jet at rates of 1–2 m/s. We speculate that the high momentum will damage villous architecture, rupturing anchoring villi and creating echogenic cystic lesions as evidenced by ultrasound. The retention of smooth muscle will also increase the risk of spontaneous vasoconstriction and ischaemia–reperfusion injury, generating oxidative stress. Dilation has a surprisingly modest impact on total blood flow, and so we suggest the placental pathology associated with deficient conversion is dominated by rheological consequences rather than chronic hypoxia.

Endovascular trophoblast invasion: implications for the pathogenesis of intrauterine growth retardation and preeclampsia.

The uterine spiral arteries in human pregnancy: facts and controversies.

R Pijnenborg,  L Vercruysse,  J.-M. Hanssens (2015)
Uterine spiral arteries play a vital role in supplying nutrients to the placenta and fetus, and for this purpose they are remodelled into highly dilated vessels by the action of invading trophoblast (physiological change). Knowledge of the mechanisms of these changes is relevant for a better understanding of pre-eclampsia and other pregnancy complications which show incomplete spiral artery remodelling. Controversies still abound concerning different steps in these physiological changes, and several of these disagreements are highlighted in this review, thereby suggesting directions for further research. First, a better definition of the degree of decidua- versus trophoblast-associated remodelling may help to devise a more adequate terminology. Other contestable issues are the vascular plugging and its relation with oxygen, trophoblast invasion from the outside or the inside of the vessels (intravasation versus extravasation), the impact of haemodynamics on endovascular migration, the replacement of arterial components by trophoblast, maternal tissue repair mechanisms and the role of uterine natural killer (NK) cells. Several of these features may be disturbed in complicated pregnancies, including the early decidua-associated vascular remodelling, vascular plugging and haemodynamics. The hyperinflammatory condition of pre-eclampsia may be responsible for vasculopathies such as acute atherosis, although the overall impact of such lesions on placental function is far from clear. Several features of the human placental bed are mirrored by processes in other species with haemochorial placentation, and studying such models may help to illuminate poorly understood aspects of human placentation.

Inadequate maternal vascular response to placentation in pregnancies complicated by pre-eclampsia and by small-for-gestational age infants.

T Khong,  I. Brosens,  F De Braud … (1986)
An examination of the maternal vascular response to placentation shows that physiological changes in the placental bed normally extend from the decidua into the inner myometrium. In pre-eclampsia and in a proportion of pregnancies with small-for-gestational age infants (SGA) the physiological changes are restricted to the decidual segments alone. In addition, complete absence of physiological changes throughout the entire length of some spiral arteries is seen in pre-eclampsia and SGA. This new observation is confirmed in a study of basal plates of placentas from abnormal pregnancies. Intraluminal endovascular trophoblast may be seen in the placental bed spiral arteries in the third trimester in pre-eclampsia and SGA, a feature not seen beyond the second trimester in normal pregnancy. These findings point to a defect in the normal interaction between migratory trophoblast and maternal uterine tissues in pre-eclampsia and in SGA.