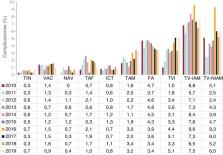 This report presents the findings of the 2019 Spanish Catheter Ablation Registry.

Data collection was retrospective. A standardized questionnaire was filled by each of the participant centers.

Data sent by 102 centers were analyzed, with a total number of ablation procedures performed of 18 549 (the highest historically reported in this registry) for a mean of 181.9 ± 137.0 and a median of 144.5 procedures per center. The ablation targets most frequently treated were atrial fibrillation (n = 5164; 27.8%), cavotricuspid isthmus (n = 3925; 21,1%) and atrioventricular nodal reentrant tachycardia (n = 3768; 20,3%). A new peak is observed in the ablation of atrial fibrillation, increasing the distance from the other substrates. The overall success rate was again 91%. The rate of major complications was 1.9%, and the mortality rate was 0.03%. An electroanatomic mapping system was used in 44.5% of all procedures, with contact force-sensing irrigated catheters become the preferred for complex substrates, as atrial fibrillation (84,8%) or ventricular tachycardia (around 90%). 1.5% of the ablations were performed in pediatric patients.

The Spanish Catheter Ablation Registry enrolls systematically and uninterruptedly the ablation procedures performed in Spain, showing a progressive increasing in the number of ablations over the years with a high success rate and low percentages of complications.

Annual Reviews Most Read Articles in 2019

Johannes Brachmann,  Thomas Deneke,  Jürgen Tebbenjohanns … (2016)
Although radiofrequency (RF) ablation has long been the standard of care for atrial fibrillation (AF) ablation, cryoballoon technology has emerged as a feasible approach with promising results. Prospective multicenter registry data referring to both ablation technologies in AF ablation are lacking so far.

A decade of catheter ablation of cardiac arrhythmias in Sweden: ablation practices and outcomes

Fredrik Holmqvist,  Milos Kesek,  Anders Englund … (2018)
Abstract Aims Catheter ablation is considered the treatment of choice for many tachyarrhythmias, but convincing ‘real-world’ data on efficacy and safety are lacking. Using Swedish national registry data, the ablation spectrum, procedural characteristics, as well as ablation efficacy and reported adverse events are reported. Methods and Results Consecutive patients (≥18 years of age) undergoing catheter ablation in Sweden between 01 January 2006 and 31 December 2015 were included in the study. Follow-up (repeat ablation and vital status) was collected through 31 December 2016. A total of 26 642 patients (57 ± 15 years, 62% men), undergoing a total of 34 428 ablation procedures were included in the study. In total, 4034 accessory pathway/Wolff–Parkinson–White syndrome (12%), 7358 AV-nodal re-entrant tachycardia (21%), 1813 atrial tachycardia (5.2%), 5481 typical atrial flutter (16%), 11 916 atrial fibrillation (AF, 35%), 2415 AV-nodal (7.0%), 581 premature ventricular contraction (PVC, 1.7%), and 964 ventricular tachycardia (VT) ablations (2.8%) were performed. Median follow-up time was 4.7 years (interquartile range 2.7–7.0). The spectrum of treated arrhythmias changed over time, with a gradual increase in AF, VT, and PVC ablation (P < 0.001). Decreasing procedural times and utilization of fluoroscopy with time, were seen for all arrhythmia types. The rates of repeat ablation differed between ablation types, with the highest repeat ablation seen in AF (41% within 3 years). The rate of reported adverse events was low (n = 595, 1.7%). Death in the immediate period following ablation was rare (n = 116, 0.34%). Conclusion Catheter ablations have shifted towards more complex procedures over the past decade. Fluoroscopy time has markedly decreased and the efficacy of catheter ablation seems to improve for AF.