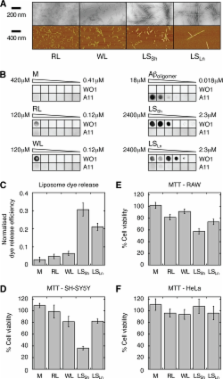 Fibrils associated with amyloid disease are molecular assemblies of key biological importance, yet how cells respond to the presence of amyloid remains unclear. Cellular responses may not only depend on the chemical composition or molecular properties of the amyloid fibrils, but their physical attributes such as length, width, or surface area may also play important roles. Here, we report a systematic investigation of the effect of fragmentation on the structural and biological properties of amyloid fibrils. In addition to the expected relationship between fragmentation and the ability to seed, we show a striking finding that fibril length correlates with the ability to disrupt membranes and to reduce cell viability. Thus, despite otherwise unchanged molecular architecture, shorter fibrillar samples show enhanced cytotoxic potential than their longer counterparts. The results highlight the importance of fibril length in amyloid disease, with fragmentation not only providing a mechanism by which fibril load can be rapidly increased but also creating fibrillar species of different dimensions that can endow new or enhanced biological properties such as amyloid cytotoxicity.

A specific amyloid-beta protein assembly in the brain impairs memory.

Linda Kotilinek,  Rakez Kayed,  Sylvain Lesne … (2006)
Memory function often declines with age, and is believed to deteriorate initially because of changes in synaptic function rather than loss of neurons. Some individuals then go on to develop Alzheimer's disease with neurodegeneration. Here we use Tg2576 mice, which express a human amyloid-beta precursor protein (APP) variant linked to Alzheimer's disease, to investigate the cause of memory decline in the absence of neurodegeneration or amyloid-beta protein amyloidosis. Young Tg2576 mice ( 14 months old) form abundant neuritic plaques containing amyloid-beta (refs 3-6). We found that memory deficits in middle-aged Tg2576 mice are caused by the extracellular accumulation of a 56-kDa soluble amyloid-beta assembly, which we term Abeta*56 (Abeta star 56). Abeta*56 purified from the brains of impaired Tg2576 mice disrupts memory when administered to young rats. We propose that Abeta*56 impairs memory independently of plaques or neuronal loss, and may contribute to cognitive deficits associated with Alzheimer's disease.

E Colvin (2003)
With the increased presence of nanomaterials in commercial products, a growing public debate is emerging on whether the environmental and social costs of nanotechnology outweigh its many benefits. To date, few studies have investigated the toxicological and environmental effects of direct and indirect exposure to nanomaterials and no clear guidelines exist to quantify these effects.