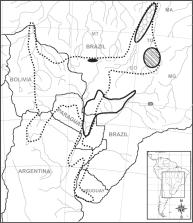 The genus Arachis Linnaeus, 1753 comprises four species with x = 9, three belong to the section Arachis : Arachis praecox (Krapov. W.C. Greg. & Valls, 1994), Arachis palustris (Krapov. W.C. Greg. & Valls, 1994) and Arachis decora (Krapov. W.C. Greg. & Valls, 1994) and only one belongs to the section Erectoides : Arachis porphyrocalyx (Valls & C.E. Simpson, 2005). Recently, the x = 9 species of section Arachis have been assigned to G genome, the latest described so far. The genomic relationship of Arachis porphyrocalyx with these species is controversial. In the present work, we carried out a karyotypic characterisation of Arachis porphyrocalyx to evaluate its genomic structure and analyse the origin of all x = 9 Arachis species. Arachis porphyrocalyx showed a karyotype formula of 14m+4st, one pair of A chromosomes, satellited chromosomes type 8, one pair of 45S rDNA sites in the SAT chromosomes, one pair of 5S rDNA sites and pericentromeric C-DAPI+ bands in all chromosomes. Karyotype structure indicates that Arachis porphyrocalyx does not share the same genome type with the other three x = 9 species and neither with the remaining Erectoides species. Taking into account the geographic distribution, morphological and cytogenetic features, the origin of species with x = 9 of the genus Arachis cannot be unique; instead, they originated at least twice in the evolutionary history of the genus.

A study of the relationships of cultivated peanut (Arachis hypogaea) and its most closely related wild species using intron sequences and microsatellite markers.

Márcio C. Moretzsohn,  José F M Valls,  Ediene Gouvea … (2012)
The genus Arachis contains 80 described species. Section Arachis is of particular interest because it includes cultivated peanut, an allotetraploid, and closely related wild species, most of which are diploids. This study aimed to analyse the genetic relationships of multiple accessions of section Arachis species using two complementary methods. Microsatellites allowed the analysis of inter- and intraspecific variability. Intron sequences from single-copy genes allowed phylogenetic analysis including the separation of the allotetraploid genome components. Intron sequences and microsatellite markers were used to reconstruct phylogenetic relationships in section Arachis through maximum parsimony and genetic distance analyses. Although high intraspecific variability was evident, there was good support for most species. However, some problems were revealed, notably a probable polyphyletic origin for A. kuhlmannii. The validity of the genome groups was well supported. The F, K and D genomes grouped close to the A genome group. The 2n = 18 species grouped closer to the B genome group. The phylogenetic tree based on the intron data strongly indicated that A. duranensis and A. ipaënsis are the ancestors of A. hypogaea and A. monticola. Intron nucleotide substitutions allowed the ages of divergences of the main genome groups to be estimated at a relatively recent 2·3-2·9 million years ago. This age and the number of species described indicate a much higher speciation rate for section Arachis than for legumes in general. The analyses revealed relationships between the species and genome groups and showed a generally high level of intraspecific genetic diversity. The improved knowledge of species relationships should facilitate the utilization of wild species for peanut improvement. The estimates of speciation rates in section Arachis are high, but not unprecedented. We suggest these high rates may be linked to the peculiar reproductive biology of Arachis.

Physical mapping of the 5S and 18S-25S rRNA genes by FISH as evidence that Arachis duranensis and A. ipaensis are the wild diploid progenitors of A. hypogaea (Leguminosae).

Graciela Lavia,  Yuri Fernandez,  Eduardo A Moscone … (2004)
The 5S and the 18S-25S rRNA genes were physically mapped by fluorescent in situ hybridization (FISH) in all botanical varieties of cultivated peanut Arachis hypogaea (2n = 4x = 40), in the wild tetraploid A. monticola, and in seven wild diploid species considered as putative ancestors of the tetraploids. A detailed karyotype analysis including the FISH signals and the heterochromatic bands was carried out. Molecular cytogenetic landmarks are provided for the construction of a FISH-based karyotype in Arachis species. The size, number, and chromosome position of FISH signals and heterochromatic bands are similar in all A. hypogaea varieties and A. monticola, but vary among the diploid species. Genome constitution of the species is discussed and several chromosome homeologies are established. The bulk of the chromosome markers mapped, together with data on geographical distribution of the taxa, suggest that peanut originated upon domestication of A. monticola and evidence that the diploids A. duranensis and A. ipaensis are the most probable ancestors of both tetraploid species. Allopolyploidy could have arisen by a single event or, if by multiple events, always from the same diploid species.