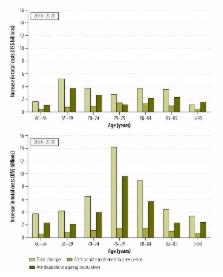 To quantify and predict the economic burden of dementia in China for the periods 1990–2010 and 2020–2030, respectively, and discuss the potential implications for national public health policy.

Using a societal, prevalence-based, gross cost-of-illness approach and data from multiple sources, we estimated or predicted total annual economic costs of dementia in China. We included direct medical costs in outpatient and inpatient settings, direct non-medical costs – e.g. the costs of transportation – and indirect costs due to loss of productivity. We excluded comorbidity-related costs.

In China, demographic and epidemiological transitions have driven the growth observed in the economic costs of dementia since the 1990s. If the future costs of dementia are to be reduced, China needs a nationwide dementia action plan to develop an integrated health and social care system and to promote primary and secondary prevention.

Decomposition analysis for policymaking in energy:

The prevalence of dementia in urban and rural areas of China.

Weishan Wang, Qi Wang, Benjamin P C Wei … (2013)
The Chinese population has been aging rapidly and the country's economy has experienced exponential growth during the past three decades. The goal of this study was to estimate the changes in the prevalence of dementia, Alzheimer's disease (AD), and vascular dementia (VaD) among elderly Chinese individuals and to analyze differences between urban and rural areas. For the years 2008 to 2009, we performed a population-based cross-sectional survey with a multistage cluster sampling design. Residents aged 65 years and older were drawn from 30 urban (n = 6096) and 45 rural (n = 4180) communities across China. Participants were assessed with a series of clinical examinations and neuropsychological measures. Dementia, AD, and VaD were diagnosed according to established criteria via standard diagnostic procedures. The prevalence of dementia, AD, and VaD among individuals aged 65 years and older were 5.14% (95% CI, 4.71-5.57), 3.21% (95% CI, 2.87-3.55), and 1.50% (95% CI, 1.26-1.74), respectively. The prevalence of dementia was significantly higher in rural areas than in urban ones (6.05% vs. 4.40%, P < .001). The same regional difference was also seen for AD (4.25% vs. 2.44%, P < .001) but not for VaD (1.28% vs. 1.61%, P = .166). The difference in AD was not evident when the sample was stratified by educational level. Moreover, the risk factors for AD and VaD differed for urban and rural populations. A notably higher prevalence of dementia and AD was found in rural areas than in urban ones, and education might be an important reason for the urban-rural differences. Copyright © 2014. Published by Elsevier Inc.

A major role for cardiovascular burden in age-related cognitive decline.

Chengxuan Qiu, Laura Fratiglioni (2015)
The incidence of dementia and cardiovascular disease (CVD) increases with age. Current evidence supports the role for both atherosclerosis and arteriosclerosis as a common pathophysiological ground for the heart-brain connection in ageing. Cognitive decline and CVDs share many vascular risk factors (VRFs) such as smoking, hypertension, and diabetes mellitus; furthermore, CVDs can contribute to cognitive decline by causing cerebral hypoperfusion, hypoxia, emboli, or infarcts. Mixed dementia, resulting from both cerebrovascular lesions and neurodegeneration, accounts for the majority of dementia cases among very old individuals (≥75 years). An accumulation of multiple VRFs, especially in middle age (40-59 years of age), can substantially increase dementia risk. The suggested declining trend in dementia risk, occurring in parallel with the decreasing incidence of cardiovascular events in high-income countries, supports the role of cardiovascular burden in dementia. Accordingly, strategies to promote cardiovascular health, especially if implemented from early life, might help to delay the onset of dementia. In this Review, we discuss the literature investigating the association of cardiovascular burden with cognitive decline and dementia over the life-course.

This is an open access article distributed under the terms of the Creative Commons Attribution IGO License ( http://creativecommons.org/licenses/by/3.0/igo/legalcode), which permits unrestricted use, distribution, and reproduction in any medium, provided the original work is properly cited. In any reproduction of this article there should not be any suggestion that WHO or this article endorse any specific organization or products. The use of the WHO logo is not permitted. This notice should be preserved along with the article's original URL.