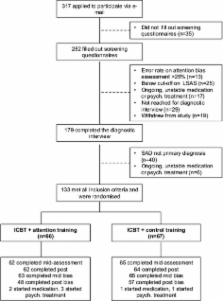 Guided Internet-based cognitive-behavioural self-help (ICBT) has been proven to be effective for social anxiety disorder (SAD) by several independent research groups. However, as the proportion of clinical significant change has room for improvement, new treatments should be developed and investigated. A novel treatment is attention bias modification (ABM). This study aimed at evaluating the combination of ABM and ICBT. We compared two groups, one group receiving ICBT and ABM targeting attentional avoidance and the other group receiving ICBT and control training. ABM and control training tasks were both based on the dot-probe paradigm. A total of 133 participants, diagnosed with SAD, were randomised to these two groups. The attention training group ( N = 66) received 2 weeks of daily attention training followed by 9 weeks of ICBT. The control group ( N = 67) received 2 weeks of daily control training, also followed by 9 weeks of ICBT. Social anxiety measures as well as the attention bias were assessed at pre-assessment, at week 2, and at post-treatment. Results showed no significant differences between the attention training group and the control group. Both groups improved substantially on social anxiety symptoms from pre- to post-assessment ( d within = 1.39–1.41), but showed no change in attention processes ( d within = 0.10–0.17). In this trial, the attention modification training failed to induce differential change in attention bias. Results demonstrate that the applied ABM procedure with its focus on the reduction of attentional avoidance was ineffective in the Internet-based setting. The results do not suggest that adding ABM targeting attentional avoidance to ICBT results in better outcomes than ICBT alone.

Ronald C Kessler,  Patricia Berglund,  Olga Demler … (2005)
Little is known about lifetime prevalence or age of onset of DSM-IV disorders. To estimate lifetime prevalence and age-of-onset distributions of DSM-IV disorders in the recently completed National Comorbidity Survey Replication. Nationally representative face-to-face household survey conducted between February 2001 and April 2003 using the fully structured World Health Organization World Mental Health Survey version of the Composite International Diagnostic Interview. Nine thousand two hundred eighty-two English-speaking respondents aged 18 years and older. Lifetime DSM-IV anxiety, mood, impulse-control, and substance use disorders. Lifetime prevalence estimates are as follows: anxiety disorders, 28.8%; mood disorders, 20.8%; impulse-control disorders, 24.8%; substance use disorders, 14.6%; any disorder, 46.4%. Median age of onset is much earlier for anxiety (11 years) and impulse-control (11 years) disorders than for substance use (20 years) and mood (30 years) disorders. Half of all lifetime cases start by age 14 years and three fourths by age 24 years. Later onsets are mostly of comorbid conditions, with estimated lifetime risk of any disorder at age 75 years (50.8%) only slightly higher than observed lifetime prevalence (46.4%). Lifetime prevalence estimates are higher in recent cohorts than in earlier cohorts and have fairly stable intercohort differences across the life course that vary in substantively plausible ways among sociodemographic subgroups. About half of Americans will meet the criteria for a DSM-IV disorder sometime in their life, with first onset usually in childhood or adolescence. Interventions aimed at prevention or early treatment need to focus on youth.

Neil Jacobson,  Paula A. Truax (1991)
In 1984, Jacobson, Follette, and Revenstorf defined clinically significant change as the extent to which therapy moves someone outside the range of the dysfunctional population or within the range of the functional population. In the present article, ways of operationalizing this definition are described, and examples are used to show how clients can be categorized on the basis of this definition. A reliable change index (RC) is also proposed to determine whether the magnitude of change for a given client is statistically reliable. The inclusion of the RC leads to a twofold criterion for clinically significant change.

This is an Open Access article. Non-commercial re-use, distribution, and reproduction in any medium, provided the original work is properly attributed and cited is permitted. The moral rights of the named author(s) have been asserted.

This is an open access article distributed under the Supplemental Terms and Conditions for iOpenAccess articles published in Taylor & Francis journals , which permits unrestricted use, distribution, and reproduction in any medium, provided the original work is properly cited.