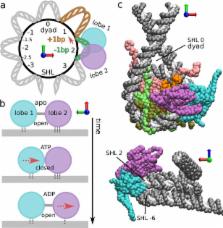 ATP-dependent chromatin remodelers are molecular machines that control genome organization by repositioning, ejecting, or editing nucleosomes, activities that confer them essential regulatory roles on gene expression and DNA replication. Here, we investigate the molecular mechanism of active nucleosome sliding by means of molecular dynamics simulations of the Snf2 remodeler translocase in complex with a nucleosome. During its inchworm motion driven by ATP consumption, the translocase overwrites the original nucleosome energy landscape via steric and electrostatic interactions to induce sliding of nucleosomal DNA unidirectionally. The sliding is initiated at the remodeler binding location via the generation of a pair of twist defects, which then spontaneously propagate to complete sliding throughout the entire nucleosome. We also reveal how remodeler mutations and DNA sequence control active nucleosome repositioning, explaining several past experimental observations. These results offer a detailed mechanistic picture of remodeling important for the complete understanding of these key biological processes.

Nucleosomes are the protein-DNA complexes underlying Eukaryotic genome organization, and serve as regulators of gene expression by occluding DNA to other proteins. This regulation requires the precise positioning of nucleosomes along DNA. Chromatin remodelers are the molecular machines that consume ATP to slide nucleosome at their correct locations, but the mechanisms of remodeling are still unclear. Based on the static structural information of a remodeler bound on nucleosome, we performed molecular dynamics computer simulations revealing the details of how remodelers slide nucleosomal DNA: the inchworm-like motion of remodelers create small DNA deformations called twist defects, which then spontaneously propagate throughout the nucleosome to induce sliding. These simulations explain several past experimental findings and are important for our understanding of genome organization.

The structure of DNA in the nucleosome core.

Grace Davey,  Stewart Richmond (2003)
The 1.9-A-resolution crystal structure of the nucleosome core particle containing 147 DNA base pairs reveals the conformation of nucleosomal DNA with unprecedented accuracy. The DNA structure is remarkably different from that in oligonucleotides and non-histone protein-DNA complexes. The DNA base-pair-step geometry has, overall, twice the curvature necessary to accommodate the DNA superhelical path in the nucleosome. DNA segments bent into the minor groove are either kinked or alternately shifted. The unusual DNA conformational parameters induced by the binding of histone protein have implications for sequence-dependent protein recognition and nucleosome positioning and mobility. Comparison of the 147-base-pair structure with two 146-base-pair structures reveals alterations in DNA twist that are evidently common in bulk chromatin, and which are of probable importance for chromatin fibre formation and chromatin remodelling.