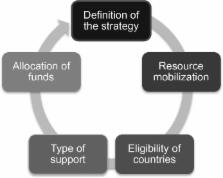 International institutions provide well over US$10 billion in development assistance for health (DAH) annually and between 1990 and 2014, DAH disbursements totaled $458 billion but how do they decide who gets what, and for what purpose? In this article, we explore how allocation decisions were made by the nine convening agencies of the Equitable Access Initiative. We provide clear, plain language descriptions of the complete process from resource mobilization to allocation for the nine multilateral agencies with prominent agendas in global health. Then, through a comparative analysis we illuminate the choices and strategies employed in the nine international institutions. We find that resource allocation in all reviewed institutions follow a similar pattern, which we categorized in a framework of five steps: strategy definition, resource mobilization, eligibility of countries, support type and funds allocation. All the reviewed institutions generate resource allocation decisions through well-structured and fairly complex processes. Variations in those processes seem to reflect differences in institutional principles and goals. However, these processes have serious shortcomings. Technical problems include inadequate flexibility to account for or meet country needs. Although aid effectiveness and value for money are commonly referenced, we find that neither performance nor impact is a major criterion for allocating resources. We found very little formal consideration of the incentives generated by allocation choices. Political issues include non-transparent influence on allocation processes by donors and bureaucrats, and the common practice of earmarking funds to bypass the normal allocation process entirely. Ethical deficiencies include low accountability and transparency at international institutions, and limited participation by affected citizens or their representatives. We find that recipient countries have low influence on allocation processes themselves, although within these processes they have some influence in relatively narrow areas.

Generation of political priority for global health initiatives: a framework and case study of maternal mortality.

Stephanie Marfy-Smith,  Jeremy Shiffman (2007)
Why do some global health initiatives receive priority from international and national political leaders whereas others receive little attention? To analyse this question we propose a framework consisting of four categories: the strength of the actors involved in the initiative, the power of the ideas they use to portray the issue, the nature of the political contexts in which they operate, and characteristics of the issue itself. We apply this framework to the case of a global initiative to reduce maternal mortality, which was launched in 1987. We undertook archival research and interviewed people connected with the initiative, using a process-tracing method that is commonly employed in qualitative research. We report that despite two decades of effort the initiative remains in an early phase of development, hampered by difficulties in all these categories. However, the initiative's 20th year, 2007, presents opportunities to build political momentum. To generate political priority, advocates will need to address several challenges, including the creation of effective institutions to guide the initiative and the development of a public positioning of the issue to convince political leaders to act. We use the framework and case study to suggest areas for future research on the determinants of political priority for global health initiatives, which is a subject that has attracted much speculation but little scholarship.

The emergence of global attention to health systems strengthening.