On the Perception of Newcomers : Toward an Evolved Psychology of Intergenerational Coalitions 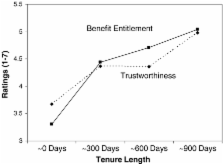 Human coalitions frequently persist through multiple, overlapping membership generations, requiring new members to cooperate and coordinate with veteran members. Does the mind contain psychological adaptations for interacting within these intergenerational coalitions? In this paper, we examine whether the mind spontaneously treats newcomers as a motivationally privileged category. Newcomers—though capable of benefiting coalitions—may also impose considerable costs (e.g., they may free ride on other members, they may be poor at completing group tasks). In three experiments we show (1) that the mind categorizes coalition members by tenure, including newcomers; (2) that tenure categorization persists in the presence of orthogonal and salient social dimensions; and (3) that newcomers elicit a pattern of impressions consistent with their probable ancestral costs. These results provide preliminary evidence for a specialized component of human coalitional psychology: an evolved concept of newcomer.

Did warfare among ancestral hunter-gatherers affect the evolution of human social behaviors?

Samuel Bowles (2009)
Since Darwin, intergroup hostilities have figured prominently in explanations of the evolution of human social behavior. Yet whether ancestral humans were largely "peaceful" or "warlike" remains controversial. I ask a more precise question: If more cooperative groups were more likely to prevail in conflicts with other groups, was the level of intergroup violence sufficient to influence the evolution of human social behavior? Using a model of the evolutionary impact of between-group competition and a new data set that combines archaeological evidence on causes of death during the Late Pleistocene and early Holocene with ethnographic and historical reports on hunter-gatherer populations, I find that the estimated level of mortality in intergroup conflicts would have had substantial effects, allowing the proliferation of group-beneficial behaviors that were quite costly to the individual altruist.

Life histories, blood revenge, and warfare in a tribal population.

N A Chagnon (1988)
Blood revenge is one of the most commonly cited causes of violence and warfare in tribal societies, yet it is largely ignored in recent anthropological theories of primitive warfare. A theory of tribal violence is presented showing how homicide, revenge, kinship obligations, and warfare are linked and why reproductive variables must be included in explanations of tribal violence and warfare. Studies of the Yanomamö Indians of Amazonas during the past 23 years show that 44 percent of males estimated to be 25 or older have participated in the killing of someone, that approximately 30 percent of adult male dealths are due to violence, and that nearly 70 percent of all adults over an estimated 40 years of age have lost a close genetic relative due to violence. Demographic data indicate that men who have killed have more wives and offspring than men who have not killed.

Categorical and contextual bases of person memory and stereotyping.

Aldo Cimino is a PhD student working on the psychology of enduring coalitions, newcomers, and hazing. He is presently conducting field work with a United States social fraternity and performing experimental investigations of hazing motivation.

Andrew W. Delton is a PhD student who uses experimental and modeling approaches to understand the psychology and evolution of cooperation.