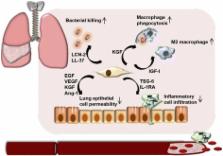 Human mesenchymal stem cells (MSCs) are multilineage somatic progenitor/stem cells that have been shown to possess immunomodulatory properties in recent years. Initially met with much skepticism, MSC immunomodulation has now been well reproduced across tissue sources and species to be clinically relevant. This has opened up the use of these versatile cells for application as 3rd party/allogeneic use in cell replacement/tissue regeneration, as well as for immune- and inflammation-mediated disease entities. Most surprisingly, use of MSCs for in immune-/inflammation-mediated diseases appears to yield more efficacy than for regenerative medicine, since engraftment of the exogenous cell does not appear necessary. In this review, we focus on this non-traditional clinical use of a tissue-specific stem cell, and highlight important findings and trends in this exciting area of stem cell therapy.

Leah Moseley,  Robert W. Hardy,  Kevin R McIntosh … (2001)
Mesenchymal stem cells (MSCs), multipotential cells that reside within the bone marrow, can be induced to differentiate into various components of the marrow microenvironment, such as bone, adipose, and stromal tissues. The bone marrow microenvironment is vital to the development, differentiation, and regulation of the lymphohematopoietic system. We hypothesized that the activities of MSCs in the bone marrow microenvironment might also include immunomodulatory effects on lymphocytes. Baboon MSCs were tested in vitro for their ability to elicit a proliferative response from allogeneic lymphocytes, to inhibit an ongoing allogeneic response, and to inhibit a proliferative response to potent T-cell mitogens. In vivo effects were tested by intravenous administration of donor MSCs to MHC-mismatched recipient baboons prior to placement of autologous, donor, and third-party skin grafts. MSCs failed to elicit a proliferative response from allogeneic lymphocytes. MSCs added into a mixed lymphocyte reaction, either on day 0 or on day 3, or to mitogen-stimulated lymphocytes, led to a greater than 50% reduction in proliferative activity. This effect could be maximized by escalating the dose of MSCs and could be reduced with the addition of exogenous IL-2. In vivo administration of MSCs led to prolonged skin graft survival when compared to control animals: 11.3 +/- 0.3 vs 7 +/- 0. Baboon MSCs have been observed to alter lymphocyte reactivity to allogeneic target cells and tissues. These immunoregulatory features may prove useful in future applications of tissue regeneration and stem cell engineering.