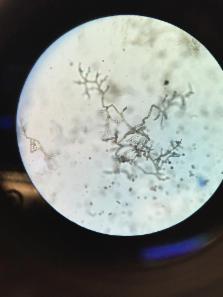 Rafael Isa-Isa,  Carlos Garcia,  Mariel Isa … (2012)
Phaeohyphomycosis designates fungal infections caused by pheoid or melanized fungi and characterized histopathologically by the presence of septate hyphae, pseudohyphae, and yeasts. Etiologic agents include Exophiala, Phoma, Bipolaris, Phialophora, Colletotrichum, Curvularia, Alternaria, Exserohilum, and Phialemonium sp. The most common are Exophiala jeanselmei and Wangiella dermatitidis. The clinical presentation depends on the immune status of the host: superficial (tinea nigra and black piedra); cutaneous (scytalidiosis) and corneal; subcutaneous (mycotic cyst); and systemic phaeohyphomycosis in the immunocompromised host. The mycotic cyst is a localized form, characterized by subcutaneous asymptomatic nodular lesions that develop after traumatic implantation of fungi, especially on the extremities. The average size of the cysts is 2.5 cm. KOH examination reveals pigmented yeasts, pseudohyphae, and hyphae. A cutaneous biopsy specimen usually shows an abscess or a suppurative granuloma with pigmented yeasts and pseudohyphae. The treatment of choice is surgical excision, but additional anti-fungal therapy is recommended for recurrent cases and immunocompromised patients.

Cutaneous phaeohyphomycosis in renal allograft recipients: report of 2 cases and review of the literature.

Phaeohyphomycosis due to Exophiala species: clinical spectrum of disease in humans.

A Crumbley,  W B Farrar,  E Sudduth (1992)
Phaeohyphomycosis caused by Exophiala species is an unusual infection, but it has been reported with increasing frequency as immunosuppressive therapy has become more widespread and laboratory methods for diagnosis have improved. To our knowledge, the first case of subcutaneous phaeohyphomycosis due to Exophiala jeanselmei in a cardiac transplant patient is presented, and previously reported cases of exophiala infection are reviewed. This patient was successfully managed with surgical excision of the lesion and combination therapy with amphotericin B and 5-fluorocytosine.