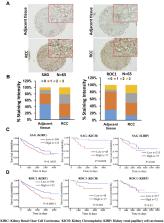 SAG (Sensitive to Apoptosis Gene) and ROC1 (Regulator of Cullin-1) are two family members of the RING component of CRL (Cullin RING ligase). Both members are essential for growth and survival of several types of human cancer cells; their role in renal cell carcinoma (RCC), however, remains elusive. Here we reported that compared to adjacent normal tissues, both SAG and ROC1 are overexpressed in RCC, which is positively correlated with poor patient survival, particularly for SAG. Depletion of SAG or ROC1 inhibited growth and survival of RCC cells by inducing G2/M arrest, senescence, and apoptosis likely due to accumulation of WEE1, p21, p27, NOXA, and BIM. Interestingly, simultaneous BIM knockdown in RCC cells partially rescues growth suppression triggered by depletion of SAG, but not ROC1, suggesting a differential role of BIM. Collectively, our study provides the proof-of-concept evidence that RING components of CRL are attractive candidates for targeted therapy of RCC.

N Pavletich,  Michele Pagano,  Deanna M. Koepp … (2002)
SCF complexes are the largest family of E3 ubiquitin-protein ligases and mediate the ubiquitination of diverse regulatory and signalling proteins. Here we present the crystal structure of the Cul1-Rbx1-Skp1-F boxSkp2 SCF complex, which shows that Cul1 is an elongated protein that consists of a long stalk and a globular domain. The globular domain binds the RING finger protein Rbx1 through an intermolecular beta-sheet, forming a two-subunit catalytic core that recruits the ubiquitin-conjugating enzyme. The long stalk, which consists of three repeats of a novel five-helix motif, binds the Skp1-F boxSkp2 protein substrate-recognition complex at its tip. Cul1 serves as a rigid scaffold that organizes the Skp1-F boxSkp2 and Rbx1 subunits, holding them over 100 A apart. The structure suggests that Cul1 may contribute to catalysis through the positioning of the substrate and the ubiquitin-conjugating enzyme, and this model is supported by Cul1 mutations designed to eliminate the rigidity of the scaffold.

Rbx1, a component of the VHL tumor suppressor complex and SCF ubiquitin ligase.

Stephen Lane,  Matthew Conaway,  O Iliopoulos … (1999)
The von Hippel-Lindau (VHL) tumor suppressor gene is mutated in most human kidney cancers. The VHL protein is part of a complex that includes Elongin B, Elongin C, and Cullin-2, proteins associated with transcriptional elongation and ubiquitination. Here it is shown that the endogenous VHL complex in rat liver also includes Rbx1, an evolutionarily conserved protein that contains a RING-H2 fingerlike motif and that interacts with Cullins. The yeast homolog of Rbx1 is a subunit and potent activator of the Cdc53-containing SCFCdc4 ubiquitin ligase required for ubiquitination of the cyclin-dependent kinase inhibitor Sic1 and for the G1 to S cell cycle transition. These findings provide a further link between VHL and the cellular ubiquitination machinery.

Rodney Hunt,  Asad Taherbhoy,  Kevin A. Schulman … (2009)
Ubiquitin and ubiquitin-like proteins (UBLs) are directed to targets by cascades of E1, E2, and E3 enzymes. The largest ubiquitin E3 subclass consists of cullin-RING ligases (CRLs), which contain one each of several cullins (CUL1, -2, -3, -4, or -5) and RING proteins (RBX1 or -2). CRLs are activated by ligation of the UBL NEDD8 to a conserved cullin lysine. How is cullin NEDD8ylation specificity established? Here we report that, like UBE2M (also known as UBC12), the previously uncharacterized E2 UBE2F is a NEDD8-conjugating enzyme in vitro and in vivo. Biochemical and structural analyses indicate how plasticity of hydrophobic E1-E2 interactions and E1 conformational flexibility allow one E1 to charge multiple E2s. The E2s have distinct functions, with UBE2M/RBX1 and UBE2F/RBX2 displaying different target cullin specificities. Together, these studies reveal the molecular basis for and functional importance of hierarchical expansion of the NEDD8 conjugation system in establishing selective CRL activation.