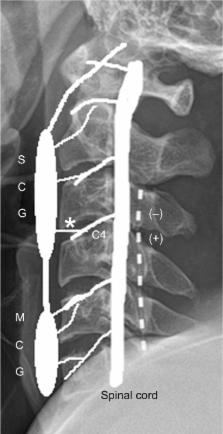 We successfully performed cervical spinal cord stimulator (SCS) surgery in a 27-year-old man with complex regional pain syndrome to control intractable pain. The SCS trial was performed twice to adjust the SCS coverage region. After permanent implantation surgery, the patient developed Horner’s syndrome when the region near the C4 spinal dorsal root was stimulated. However, Horner’s syndrome disappeared after changing the stimulation leads. This case report suggests that cervical SCS can be associated with superior cervical ganglion stimulation.

Stephen Bruehl (2015)
Complex regional pain syndrome is a chronic pain condition characterized by autonomic and inflammatory features. It occurs acutely in about 7% of patients who have limb fractures, limb surgery, or other injuries. Many cases resolve within the first year, with a smaller subset progressing to the chronic form. This transition is often paralleled by a change from "warm complex regional pain syndrome," with inflammatory characteristics dominant, to "cold complex regional pain syndrome" in which autonomic features dominate. Multiple peripheral and central mechanisms seem to be involved, the relative contributions of which may differ between individuals and over time. Possible contributors include peripheral and central sensitization, autonomic changes and sympatho-afferent coupling, inflammatory and immune alterations, brain changes, and genetic and psychological factors. The syndrome is diagnosed purely on the basis of clinical signs and symptoms. Effective management of the chronic form of the syndrome is often challenging. Few high quality randomized controlled trials are available to support the efficacy of the most commonly used interventions. Reviews of available randomized trials suggest that physical and occupational therapy (including graded motor imagery and mirror therapy), bisphosphonates, calcitonin, subanesthetic intravenous ketamine, free radical scavengers, oral corticosteroids, and spinal cord stimulation may be effective treatments. Multidisciplinary clinical care, which centers around functionally focused therapies is recommended. Other interventions are used to facilitate engagement in functional therapies and to improve quality of life.

A review of spinal cord stimulation systems for chronic pain

Paul Verrills,  Chantelle Sinclair,  Adele Barnard (2016)
Spinal cord stimulation (SCS) applications and technologies are fast advancing. New SCS technologies are being used increasingly in the clinical environment, but often there is a lag period between the clinical application and the publishing of high-quality evidence on safety and efficacy. Recent developments will undoubtedly expand the applicability of SCS, allowing more effective and individualized treatment for patients, and may have the potential to salvage patients who have previously failed neuromodulation. Already, high-level evidence exists for the safety, efficacy, and cost-effectiveness (Level I–II) of traditional SCS therapies in the treatment of chronic refractory low back with predominant limb pain (regardless of surgical history). More than half of all patients with chronic painful conditions experience sustained and significant levels of pain reduction following SCS treatment. Although only limited evidence exists for burst stimulation, there is now Level I evidence for both dorsal root ganglion SCS and high-frequency SCS that demonstrates compelling results compared with traditional therapies. The body of evidence built on traditional SCS research may be redundant, with newer iterations of SCS therapies such as dorsal root ganglion SCS, high-frequency SCS, and burst SCS. A number of variables have been identified that can affect SCS efficacy: implanter experience, appropriate patient selection, etiologies of patient pain, existence of comorbidities, including psychiatric illness, smoking status, and delay to SCS implant following pain onset. Overall, scientific literature demonstrates SCS to be a safe, effective, and drug-free treatment option for many chronic pain etiologies.

Present and potential use of spinal cord stimulation to control chronic pain.

Jason Song,  Adrian Popescu,  Russell Bell (2021)
Spinal cord stimulation is an intervention that has become increasingly popular due to the growing body of literature showing its effectiveness in treating pain and the reversible nature of the treatment with implant removal. It is currently approved by the FDA for chronic pain of the trunk and limbs, intractable low back pain, leg pain, and pain from failed back surgery syndrome. In Europe, it has additional approval for refractory angina pectoris and peripheral limb ischemia.