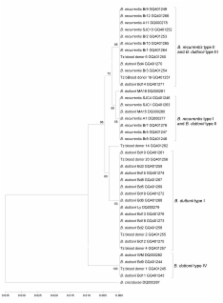 B. recurrentis may have evolved directly from B. duttonii.

Differentiation of endemic East African tick-borne relapsing fever Borrelia duttonii spirochetes from epidemic louse-borne relapsing fever (LBRF) B. recurrentis spirochetes into different species has been questioned. We assessed a noncoding intragenic spacer (IGS) region to compare genotypes found in clinical samples from relapsing fever patients. Although IGS typing was highly discriminatory and resolved 4 East African tick-borne relapsing fever groups from a disease-endemic region in Tanzania, 2 IGS clades were found among LBRF patients in Ethiopia. The 2 IGS sequence types for B. recurrentis overlapped with 2 of the 4 groups found among B. duttonii. All cultivable isolates of B. duttonii fell into a single IGS cluster, which suggests their analysis might introduce selective bias. We provide further support that B. recurrentis is a subset of B. duttonii and represents an ecotype rather than a species. These observations have disease control implications and suggest LBRF Borrelia spp. could reemerge from its tick-borne reservoirs where vectors coexist.

E Helgason,  O A Okstad,  D A Caugant … (2000)
Bacillus anthracis, Bacillus cereus, and Bacillus thuringiensis are members of the Bacillus cereus group of bacteria, demonstrating widely different phenotypes and pathological effects. B. anthracis causes the acute fatal disease anthrax and is a potential biological weapon due to its high toxicity. B. thuringiensis produces intracellular protein crystals toxic to a wide number of insect larvae and is the most commonly used biological pesticide worldwide. B. cereus is a probably ubiquitous soil bacterium and an opportunistic pathogen that is a common cause of food poisoning. In contrast to the differences in phenotypes, we show by multilocus enzyme electrophoresis and by sequence analysis of nine chromosomal genes that B. anthracis should be considered a lineage of B. cereus. This determination is not only a formal matter of taxonomy but may also have consequences with respect to virulence and the potential of horizontal gene transfer within the B. cereus group.

The Genome of Borrelia recurrentis, the Agent of Deadly Louse-Borne Relapsing Fever, Is a Degraded Subset of Tick-Borne Borrelia duttonii

Qiyuan Dai,  Blanca I Restrepo,  Stephen F Porcella … (2006)
The relapsing fever agent Borrelia hermsii undergoes multiphasic antigenic variation through gene conversion of a unique expression site on a linear plasmid by an archived variable antigen gene. To further characterize this mechanism we assessed the repertoire and organization of archived variable antigen genes by sequencing approximately 85% of plasmids bearing these genes. Most archived genes shared with the expressed gene a