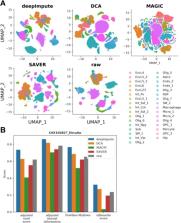 Single-cell RNA sequencing (scRNA-seq) offers new opportunities to study gene expression of tens of thousands of single cells simultaneously. We present DeepImpute, a deep neural network-based imputation algorithm that uses dropout layers and loss functions to learn patterns in the data, allowing for accurate imputation. Overall, DeepImpute yields better accuracy than other six publicly available scRNA-seq imputation methods on experimental data, as measured by the mean squared error or Pearson’s correlation coefficient. DeepImpute is an accurate, fast, and scalable imputation tool that is suited to handle the ever-increasing volume of scRNA-seq data, and is freely available at https://github.com/lanagarmire/DeepImpute.

Alex Shalek,  Rahul Satija,  Xian Adiconis … (2013)
Recent molecular studies have revealed that, even when derived from a seemingly homogenous population, individual cells can exhibit substantial differences in gene expression, protein levels, and phenotypic output 1–5 , with important functional consequences 4,5 . Existing studies of cellular heterogeneity, however, have typically measured only a few pre-selected RNAs 1,2 or proteins 5,6 simultaneously because genomic profiling methods 3 could not be applied to single cells until very recently 7–10 . Here, we use single-cell RNA-Seq to investigate heterogeneity in the response of bone marrow derived dendritic cells (BMDCs) to lipopolysaccharide (LPS). We find extensive, and previously unobserved, bimodal variation in mRNA abundance and splicing patterns, which we validate by RNA-fluorescence in situ hybridization (RNA-FISH) for select transcripts. In particular, hundreds of key immune genes are bimodally expressed across cells, surprisingly even for genes that are very highly expressed at the population average. Moreover, splicing patterns demonstrate previously unobserved levels of heterogeneity between cells. Some of the observed bimodality can be attributed to closely related, yet distinct, known maturity states of BMDCs; other portions reflect differences in the usage of key regulatory circuits. For example, we identify a module of 137 highly variable, yet co-regulated, antiviral response genes. Using cells from knockout mice, we show that variability in this module may be propagated through an interferon feedback circuit involving the transcriptional regulators Stat2 and Irf7. Our study demonstrates the power and promise of single-cell genomics in uncovering functional diversity between cells and in deciphering cell states and circuits.

The technology and biology of single-cell RNA sequencing.

Aleksandra A. Kolodziejczyk,  Jong Kim,  Valentine Svensson … (2015)
The differences between individual cells can have profound functional consequences, in both unicellular and multicellular organisms. Recently developed single-cell mRNA-sequencing methods enable unbiased, high-throughput, and high-resolution transcriptomic analysis of individual cells. This provides an additional dimension to transcriptomic information relative to traditional methods that profile bulk populations of cells. Already, single-cell RNA-sequencing methods have revealed new biology in terms of the composition of tissues, the dynamics of transcription, and the regulatory relationships between genes. Rapid technological developments at the level of cell capture, phenotyping, molecular biology, and bioinformatics promise an exciting future with numerous biological and medical applications.