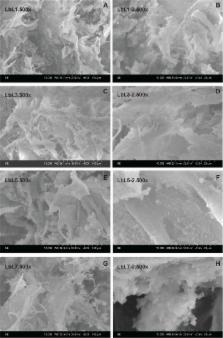 A layer-by layer technique was successfully used to obtain collagen/hydroxyapatite-magnetite-cisplatin (COLL/HA n-Fe 3O 4-CisPt, n=1–7) composite materials with a variable content of hydroxyapatite intended for use in the treatment of bone cancer. The main advantages of this system are the possibility of controlling the rate of delivery of cytostatic agents, the presence of collagen and hydroxyapatite to ensure more rapid healing of the injured bone tissue, and the potential for magnetite to be a passive antitumoral component that can be activated when an appropriate external electromagnetic field is applied. In vitro cytotoxicity assays performed on the COLL/HA n-Fe 3O 4-CisPt materials obtained using a layer-by layer method confirmed their antitumoral activity. Samples with a higher content of hydroxyapatite had more antitumoral activity because of their better absorption of cisplatin and consequently a higher amount of cisplatin being present in the matrices.

L. Hirsch,  R Stafford,  J. Bankson … (2011)
Metal nanoshells are a class of nanoparticles with tunable optical resonances. In this article, an application of this technology to thermal ablative therapy for cancer is described. By tuning the nanoshells to strongly absorb light in the near infrared, where optical transmission through tissue is optimal, a distribution of nanoshells at depth in tissue can be used to deliver a therapeutic dose of heat by using moderately low exposures of extracorporeally applied near-infrared (NIR) light. Human breast carcinoma cells incubated with nanoshells in vitro were found to have undergone photothermally induced morbidity on exposure to NIR light (820 nm, 35 W/cm2), as determined by using a fluorescent viability stain. Cells without nanoshells displayed no loss in viability after the same periods and conditions of NIR illumination. Likewise, in vivo studies under magnetic resonance guidance revealed that exposure to low doses of NIR light (820 nm, 4 W/cm2) in solid tumors treated with metal nanoshells reached average maximum temperatures capable of inducing irreversible tissue damage (DeltaT = 37.4 +/- 6.6 degrees C) within 4-6 min. Controls treated without nanoshells demonstrated significantly lower average temperatures on exposure to NIR light (DeltaT < 10 degrees C). These findings demonstrated good correlation with histological findings. Tissues heated above the thermal damage threshold displayed coagulation, cell shrinkage, and loss of nuclear staining, which are indicators of irreversible thermal damage. Control tissues appeared undamaged.

V. González-Quintanilla,  Covadonga Alonso,  M Fuertes … (2001)
It is generally accepted that DNA damage and subsequent induction of apoptosis may be the primary cytotoxic mechanism of cisplatin and other DNA-binding antitumor drugs (Fisher,1994). Because the final step of apoptosis is characterized by morphological changes in the nucleus, the death signals of the execution phase must be transmitted from the cytoplasm to the nucleus. Thus, the recognition and processing of cisplatin-induced DNA damage through"classic" apoptosis, requires that a nuclear signal, generated at the initiation phase, be transmitted to the cytoplasm to be processed through the effector and execution phases. At the end of the execution phase, the apoptotic signal must come back to the nucleus to produce internucleosomal DNA degradation. Therefore, the induction of apoptosis from detection and subsequent processing of cisplatin-induced DNA damage seems to be a long and complex process of cell death. However, because cisplatin is a nonspecific drug and reacts not only with DNA but also with proteins,we cannot rule out the possibility that in some cases of cisplatin-induced apoptosis, an easier process of initiation, such as damage to cytoplasmic proteins, may take place (Pérez, 1998). Thus, damage to proteins is worth considering as a factor contributing to cisplatin-induced apoptosis. Moreover, it is possible that cisplatin damage to proteins could induce apoptosis at the execution phase level. In fact, initiation of apoptosis at the execution phase (activation of caspases) has been previously reported for the cell killing produced by cytotoxic T lymphocytes (Golstein et al., 1991). Although apoptosis and necrosis are conceptually distinct forms of cell death with very different morphological and biochemical characteristics, these two types of demise may occur simultaneously in tissues or cell cultures exposed to the same insult (Eguchi et al., 1997, Zhan et al., 1999). In fact, both types of cell death have been found in the same population of cisplatin-treated cells (Pestell et al., 2000). Moreover, it has been hypothesized that in a tissue or cell population,apoptosis and necrosis might be two extremes of a continuum of possible types of cell demise. Individual cell death would be decided by factors such as the availability of energy and the metabolic condition of the cell (Leist et al., 1997). Thus, some cells might die as a result of an unfinished apoptotic program. In fact, in L1210 leukemic cells, cisplatin-induced cell death seems to be the result of a defective apoptotic program that lacks some morphological and biochemical characteristics attributed to apoptosis (Segal-Bendirdjian and Jacquemin-Sablon, 1995). In addition, at high doses, cisplatin could damage molecules involved in cellular energy supply (i.e., ATP) and also proteins directly or indirectly involved in the apoptotic process (i.e., p53, Bax, Bcl-2, and caspases), leading to necrotic cell death. In fact, in cisplatin-resistant keratinocytes transformed by H-ras oncogene, a high dose of cisplatin (312 microM) induces characteristic features of necrotic cell death(Pérez et al., 1999). Thus, depending on the level of cellular damage induced by cisplatin, necrosis could take place either directly or as a consequence of an unfinished apoptotic program. In summary, a growing body of evidence suggests that cisplatin-induced cell death does not always come from "classic"apoptosis. Depending on both cisplatin dose and cellular status, cisplatin may also induced cell death by a defective apoptotic program or even by necrosis. Elucidation of the conditions under which the apoptotic program induced by cisplatin as well as other antitumor drugs is totally or partially executed may have important implications for the outcome of cancer chemotherapy.

Scott E. McNeil (2015)
Nanotechnology offers many potential benefits to cancer research through passive and active targeting, increased solubility/bioavailablility, and novel therapies. However, preclinical characterization of nanoparticles is complicated by the variety of materials, their unique surface properties, reactivity, and the task of tracking the individual components of multicomponent, multifunctional nanoparticle therapeutics in in vivo studies. There are also regulatory considerations and scale-up challenges that must be addressed. Despite these hurdles, cancer research has seen appreciable improvements in efficacy and quite a decrease in the toxicity of chemotherapeutics because of 'nanotech' formulations, and several engineered nanoparticle clinical trials are well underway. This article reviews some of the challenges and benefits of nanomedicine for cancer therapeutics and diagnostics. 2009 John Wiley & Sons, Inc.