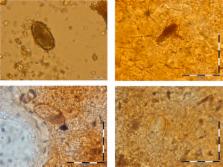 Two calcified objects recovered from a 3rd to 4th-century grave of an adolescent in Amiens (Northern France) were identified as probable hydatid cysts. By using thin-section petrographic techniques, probable Calodium hepaticum (syn. Capillaria hepatica) eggs were identified in the wall of the cysts. Human hepatic capillariosis has not been reported from archaeological material so far, but could be expected given the poor level of environmental hygiene prevalent in this period. Identification of tissue-dwelling parasites such as C. hepaticum in archaeological remains is particularly dependent on preservation conditions and taphonomic changes and should be interpreted with caution due to morphological similarities with Trichuris sp. eggs.

Worldwide epidemiology of liver hydatidosis including the Mediterranean area.

Salvatore Gruttadauria,  Giuseppe Grosso,  Stefano Marventano … (2012)
The worldwide incidence and prevalence of cystic echinococcosis have fallen dramatically over the past several decades. Nonetheless, infection with Echinococcus granulosus (E. granulosus) remains a major public health issue in several countries and regions, even in places where it was previously at low levels, as a result of a reduction of control programmes due to economic problems and lack of resources. Geographic distribution differs by country and region depending on the presence in that country of large numbers of nomadic or semi-nomadic sheep and goat flocks that represent the intermediate host of the parasite, and their close contact with the final host, the dog, which mostly provides the transmission of infection to humans. The greatest prevalence of cystic echinococcosis in human and animal hosts is found in countries of the temperate zones, including several parts of Eurasia (the Mediterranean regions, southern and central parts of Russia, central Asia, China), Australia, some parts of America (especially South America) and north and east Africa. Echinococcosis is currently considered an endemic zoonotic disease in the Mediterranean region. The most frequent strain associated with human cystic echinococcosis appears to be the common sheep strain (G1). This strain appears to be widely distributed in all continents. The purpose of this review is to examine the distribution of E. granulosus and the epidemiology of a re-emerging disease such as cystic echinococcosis.

Herbert Auer,  Hans-Peter Fuehrer,  Petra Igel (2011)
Capillaria hepatica (syn. for Calodium hepaticum) is a zoonotic nematode parasitizing in the livers of rodents as main hosts and in numerous other mammals including humans. It is the causative agent of the rare conditions of hepatic capillariosis and spurious C. hepatica infections in humans. In this review, 163 reported cases of infestations with this parasite (72 reports of hepatic capillariosis, 13 serologically confirmed infestations and 78 observations of spurious infections) are summarized with an overview on the distribution, symptoms, pathology, diagnosis, serology and therapy of this rare human pathogen.

Infection by Eucoleus aerophilus in dogs and cats: is another extra-intestinal parasitic nematode of pets emerging in Italy?

Donato Traversa,  Angela Di Cesare,  Piermarino Milillo … (2009)
The occurrence of the infection by the lungworm Eucoleus aerophilus (syn. Capillaria aerophila) in dogs and cats from Italy has been evaluated with conventional diagnostic procedures. Individual faecal samples from 569 dogs and 200 cats were undertaken to faecal flotation with sugar and zinc sulphate solution. Sixteen dogs (2.8%) and 11 cats (5.5%) scored positive for eggs of E. aerophilus when samples were processed with either of the two flotation solutions. Overall 14 of 16 dogs and eight of 11 cats infected by E. aerophilus showed respiratory symptoms and the most common were general respiratory distress, dry cough, wheezing and sneezing. These results indicate that E. aerophilus is not uncommon and that canine and feline capillariosis is of clinical importance. Given the impact that E. aerophilus infections may have upon animal health and its zoonotic potential, it is strongly advisable to routinely include this disease in the differential diagnosis of (cardio)-respiratory diseases of dogs and cats.