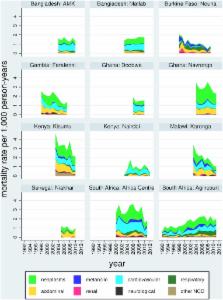 Low- and middle-income countries are often described as being at intermediate stages of epidemiological transition, but there is little population-based data with reliable cause of death assignment to examine the situation in more detail. Non-communicable diseases are widely seen as a coming threat to population health, alongside receding burdens of infection. The INDEPTH Network has collected empirical population data in a number of health and demographic surveillance sites in low- and middle-income countries which permit more detailed examination of mortality trends over time.

To examine cause-specific mortality trends across all ages at INDEPTH Network sites in Africa and Asia during the period 1992–2012. Emphasis is given to the 15–64 year age group, which is the main focus of concern around the impact of the HIV pandemic and emerging non-communicable disease threats.

A total of 96,255 deaths were observed during 9,487,418 person years at the 12 sites. Verbal autopsies were completed for 86,039 deaths (89.4%). There were substantial variations in mortality rates between sites and over time. HIV-related mortality played a major part at sites in eastern and southern Africa. Deaths in the age group 15–64 years accounted for 43% of overall mortality. Trends in mortality were generally downwards, in some cases quite rapidly so. The Bangladeshi sites reflected populations at later stages of transition than in Africa, and were largely free of the effects of HIV/AIDS.

To some extent the patterns of epidemiological transition observed followed theoretical expectations, despite the impact of the HIV pandemic having a major effect in some locations. Trends towards lower overall mortality, driven by decreasing infections, were the general pattern. Low- and middle-income country populations appear to be in an era of rapid transition.

David Obor,  Kevin deCock,  Bernard Nahlen … (2012)
The KEMRI/Centers for Disease Control and Prevention (CDC) Health and Demographic Surveillance System (HDSS) is located in Rarieda, Siaya and Gem Districts (Siaya County), lying northeast of Lake Victoria in Nyanza Province, western Kenya. The KEMRI/CDC HDSS, with approximately 220 000 inhabitants, has been the foundation for a variety of studies, including evaluations of insecticide-treated bed nets, burden of diarrhoeal disease and tuberculosis, malaria parasitaemia and anaemia, treatment strategies and immunological correlates of malaria infection, and numerous HIV, tuberculosis, malaria and diarrhoeal disease treatment and vaccine efficacy and effectiveness trials for more than a decade. Current studies include operations research to measure the uptake and effectiveness of the programmatic implementation of integrated malaria control strategies, HIV services, newly introduced vaccines and clinical trials. The HDSS provides general demographic and health information (such as population age structure and density, fertility rates, birth and death rates, in- and out-migrations, patterns of health care access and utilization and the local economics of health care) as well as disease- or intervention-specific information. The HDSS also collects verbal autopsy information on all deaths. Studies take advantage of the sampling frame inherent in the HDSS, whether at individual, household/compound or neighbourhood level.

Profile of the Navrongo Health and Demographic Surveillance System.

Cornelius Debpuur,  Abraham Oduro,  A Nazzar … (2012)
Located in the Kassena-Nankana districts of northern Ghana, the Navrongo health and demographic surveillance system (NHDSS) was established in 1992 by the Navrongo health research centre (NHRC). The NHRC is one of three research centres of the Ghana health service. The activities and potential of the NHDSS for collaborative research are described. The NHDSS monitors health and demographic dynamics of the two Kassena-Nankana districts of northern Ghana and facilitates evaluation of the morbidity and mortality impact of health and social interventions. The total population currently under surveillance is 152 000 residing in 32 000 households. Events monitored routinely include pregnancies, births, morbidity, deaths, migration, marriages and vaccination coverage. Data updates are done every 4 months by trained fieldworkers. The NHRC also undertakes biomedical and socio-economic studies. Additional features of the NHDSS include the community key informant system where trained volunteers routinely report key events, such as births and deaths as they occur in their locality and the verbal autopsy (VA) system for determining the probable causes of deaths that occur at the community level. Data from the NHDSS are shared with funders and collaborators and partners in the INDEPTH Network. The Director of the NHDSS is the contact person for potential collaboration with the NHDSS and the use of its data.

This work was supported by the Umeå Centre for Global Health Research, which is core funded by Forte, the Swedish Research Council for Health, Working Life and Welfare (grant no.200611512). The funder had no role in study design, data collection and analysis, decision to publish, or preparation of the manuscript.