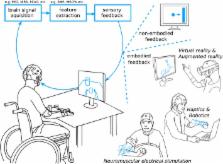 Brain‐computer interfaces ( BCIs) can provide sensory feedback of ongoing brain oscillations, enabling stroke survivors to modulate their sensorimotor rhythms purposefully. A number of recent clinical studies indicate that repeated use of such BCIs might trigger neurological recovery and hence improvement in motor function. Here, we provide a first meta‐analysis evaluating the clinical effectiveness of BCI‐based post‐stroke motor rehabilitation. Trials were identified using MEDLINE, CENTRAL, PEDro and by inspection of references in several review articles. We selected randomized controlled trials that used BCIs for post‐stroke motor rehabilitation and provided motor impairment scores before and after the intervention. A random‐effects inverse variance method was used to calculate the summary effect size. We initially identified 524 articles and, after removing duplicates, we screened titles and abstracts of 473 articles. We found 26 articles corresponding to BCI clinical trials, of these, there were nine studies that involved a total of 235 post‐stroke survivors that fulfilled the inclusion criterion (randomized controlled trials that examined motor performance as an outcome measure) for the meta‐analysis. Motor improvements, mostly quantified by the upper limb Fugl‐Meyer Assessment ( FMA‐ UE), exceeded the minimal clinically important difference ( MCID=5.25) in six BCI studies, while such improvement was reached only in three control groups. Overall, the BCI training was associated with a standardized mean difference of 0.79 (95% CI: 0.37 to 1.20) in FMA‐ UE compared to control conditions, which is in the range of medium to large summary effect size. In addition, several studies indicated BCI‐induced functional and structural neuroplasticity at a subclinical level. This suggests that BCI technology could be an effective intervention for post‐stroke upper limb rehabilitation. However, more studies with larger sample size are required to increase the reliability of these results.

Ranganatha Sitaram,  Tomas Ros,  Luke E. Stoeckel … (2016)
Neurofeedback is a psychophysiological procedure in which online feedback of neural activation is provided to the participant for the purpose of self-regulation. Learning control over specific neural substrates has been shown to change specific behaviours. As a progenitor of brain–machine interfaces, neurofeedback has provided a

Clinically important differences for the upper-extremity Fugl-Meyer Scale in people with minimal to moderate impairment due to chronic stroke.

George D Fulk,  Pierce Boyne,  Angie S Page (2012)
The upper-extremity portion of the Fugl-Meyer Scale (UE-FM) is one of the most established and commonly used outcome measures in stroke rehabilitative trials. Empirical work is needed to determine the amount of change in UE-FM scores that can be regarded as important and clinically meaningful for health professionals, patients, and other stakeholders. This study used anchor-based methods to estimate the clinically important difference (CID) for the UE-FM in people with minimal to moderate impairment due to chronic stroke. One hundred forty-six individuals with stable, mild to moderate upper-extremity (UE) hemiparesis were administered the UE-FM before and after an intervention targeting their affected UEs. The treating therapists rated each participant's perceived amount of UE motor recovery on a global rating of change (GROC) scale evaluating several facets of UE movement (grasp, release, move the affected UE, perform 5 important functional tasks with the affected UE, overall UE function). Estimated CID of the UE-FM scores was calculated using receiver operating characteristic (ROC) curve with the GROC scores as the anchor. The ROC curve analysis revealed that change in UE-FM scores during the intervention period distinguished participants who experienced clinically important improvement from those that did not based on the therapists' GROC scores. The area under the curve ranged from 0.61 to 0.70 for the different facets of UE movement. The estimated CID of the UE-FM scores ranged from 4.25 to 7.25 points, depending on the different facets of UE movement.