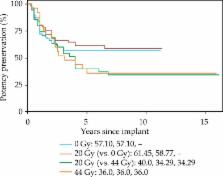 Patient administered urinary, bowel, and erectile quality of life (QoL) instrument were obtained prior to treatment and following brachytherapy. The study population was comprised of the 457 patients who were alive as of June 2016, had been randomized to two markedly different supplemental EBRT dose regimens and a third arm without supplemental EBRT, and had completed the June 2016 QoL survey. The need for urinary or bowel surgical intervention was prospectively recorded during routine follow-up. Multiple parameters were evaluated for effect on outcomes.

The urinary catheter was removed on day 0 in 92.1% of patients and 0.4% required a post-implant transurethral prostatic resection (TURP). On average, the International Prostate Symptom Score (IPSS) normalized at week 14. The 10-year rate of urethral strictures was 5.3%. No significant differences were discerned between baseline and post-implant rectal function assessment score (RFAS), and no patient developed a rectal ulcer or fistula. The 10-year potency preservation rate was 50.3%. Supplemental EBRT did not affect urinary, bowel, or erectile function. Urethral strictures were most closely related to bulbomembranous urethral brachytherapy doses, post-implant rectal function to pre-implant hemorroidal bleeding, and RFAS and erectile function to pre-brachytherapy international index of erectile function and age.

Incidence of urethral stricture after primary treatment for prostate cancer: data From CaPSURE.