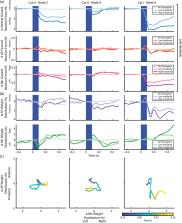 We have demonstrated previously that microstimulation in the dorsal root ganglia (DRG) can selectively evoke activity in primary afferent neurons in anesthetized cats. This study describes the results of experiments focused on characterizing the postural effects of DRG microstimulation in awake cats during quiet standing.

To understand the parameters of stimulation that can affect these postural shifts, we measured changes in ground reaction forces (GRF) while varying stimulation location and amplitude. Four animals were chronically implanted at the L6 and L7 DRG with penetrating multichannel microelectrode arrays. During each week of testing, we identified electrode channels that recruited primary afferent neurons with fast (80–120 m s −1) and medium (30–75 m s −1) conduction velocities, and selected one channel to deliver current-controlled biphasic stimulation trains during quiet standing.

Postural responses were identified by changes in GRFs and were characterized based on their magnitude and latency. During DRG microstimulation, animals did not exhibit obvious signs of distress or discomfort, which could be indicative of pain or aversion to a noxious sensation. Across 56 total weeks, 13 electrode channels evoked behavioral responses, as detected by a significant change in GRF. Stimulation amplitude modulated the magnitude of the GRF responses for these 13 channels ( p < 0.001). It was not possible to predict whether or not an electrode would drive a behavioral response based on information including conduction velocity, recruitment threshold, or the DRG in which it resided.

The distinct and repeatable effects on the postural response to low amplitude (<40 μA) DRG microstimulation support that this technique may be an effective way to restore somatosensory feedback after neurological injuries such as amputation.

Daniel W Tan, Matthew A Schiefer, Michael Keith … (2014)
Touch perception on the fingers and hand is essential for fine motor control, contributes to our sense of self, allows for effective communication, and aids in our fundamental perception of the world. Despite increasingly sophisticated mechatronics, prosthetic devices still do not directly convey sensation back to their wearers. We show that implanted peripheral nerve interfaces in two human subjects with upper limb amputation provided stable, natural touch sensation in their hands for more than 1 year. Electrical stimulation using implanted peripheral nerve cuff electrodes that did not penetrate the nerve produced touch perceptions at many locations on the phantom hand with repeatable, stable responses in the two subjects for 16 and 24 months. Patterned stimulation intensity produced a sensation that the subjects described as natural and without "tingling," or paresthesia. Different patterns produced different types of sensory perception at the same location on the phantom hand. The two subjects reported tactile perceptions they described as natural tapping, constant pressure, light moving touch, and vibration. Changing average stimulation intensity controlled the size of the percept area; changing stimulation frequency controlled sensation strength. Artificial touch sensation improved the subjects' ability to control grasping strength of the prosthesis and enabled them to better manipulate delicate objects. Thus, electrical stimulation through peripheral nerve electrodes produced long-term sensory restoration after limb loss.

Sharlene Flesher, Jennifer L. Collinger, Stephen T Foldes … (2016)
Intracortical microstimulation of the somatosensory cortex offers the potential for creating a sensory neuroprosthesis to restore tactile sensation. Whereas animal studies have suggested that both cutaneous and proprioceptive percepts can be evoked using this approach, the perceptual quality of the stimuli cannot be measured in these experiments. We show that microstimulation within the hand area of the somatosensory cortex of a person with long-term spinal cord injury evokes tactile sensations perceived as originating from locations on the hand and that cortical stimulation sites are organized according to expected somatotopic principles. Many of these percepts exhibit naturalistic characteristics (including feelings of pressure), can be evoked at low stimulation amplitudes, and remain stable for months. Further, modulating the stimulus amplitude grades the perceptual intensity of the stimuli, suggesting that intracortical microstimulation could be used to convey information about the contact location and pressure necessary to perform dexterous hand movements associated with object manipulation.

The proprioceptive senses: their roles in signaling body shape, body position and movement, and muscle force.

Uwe Proske, Simon Gandevia (2012)
This is a review of the proprioceptive senses generated as a result of our own actions. They include the senses of position and movement of our limbs and trunk, the sense of effort, the sense of force, and the sense of heaviness. Receptors involved in proprioception are located in skin, muscles, and joints. Information about limb position and movement is not generated by individual receptors, but by populations of afferents. Afferent signals generated during a movement are processed to code for endpoint position of a limb. The afferent input is referred to a central body map to determine the location of the limbs in space. Experimental phantom limbs, produced by blocking peripheral nerves, have shown that motor areas in the brain are able to generate conscious sensations of limb displacement and movement in the absence of any sensory input. In the normal limb tendon organs and possibly also muscle spindles contribute to the senses of force and heaviness. Exercise can disturb proprioception, and this has implications for musculoskeletal injuries. Proprioceptive senses, particularly of limb position and movement, deteriorate with age and are associated with an increased risk of falls in the elderly. The more recent information available on proprioception has given a better understanding of the mechanisms underlying these senses as well as providing new insight into a range of clinical conditions.

Original content from this work may be used under the terms of the Creative Commons Attribution 3.0 licence.