Understanding and Managing Pregnancy in Patients with Lupus 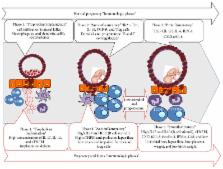 Systemic lupus erythematosus (SLE) is a chronic, multisystemic autoimmune disease that occurs predominantly in women of fertile age. The association of SLE and pregnancy, mainly with active disease and especially with nephritis, has poorer pregnancy outcomes, with increased frequency of preeclampsia, fetal loss, prematurity, growth restriction, and newborns small for gestational age. Therefore, SLE pregnancies are considered high risk condition, should be monitored frequently during pregnancy and delivery should occur in a controlled setting. Pregnancy induces dramatic immune and neuroendocrine changes in the maternal body in order to protect the fetus from immunologic attack and these modifications can be affected by SLE. The risk of flares depends on the level of maternal disease activity in the 6–12 months before conception and is higher in women with repeated flares before conception, in those who discontinue useful medications and in women with active glomerulonephritis at conception. It is a challenge to differentiate lupus nephritis from preeclampsia and, in this context, the angiogenic and antiangiogenic cytokines are promising. Prenatal care of pregnant patients with SLE requires close collaboration between rheumatologist and obstetrician. Planning pregnancy is essential to increase the probability of successful pregnancies.

Richard Levine,  Sharon E. Maynard,  Cong Qian … (2004)
The cause of preeclampsia remains unclear. Limited data suggest that excess circulating soluble fms-like tyrosine kinase 1 (sFlt-1), which binds placental growth factor (PlGF) and vascular endothelial growth factor (VEGF), may have a pathogenic role. We performed a nested case-control study within the Calcium for Preeclampsia Prevention trial, which involved healthy nulliparous women. Each woman with preeclampsia was matched to one normotensive control. A total of 120 pairs of women were randomly chosen. Serum concentrations of angiogenic factors (total sFlt-1, free PlGF, and free VEGF) were measured throughout pregnancy; there were a total of 655 serum specimens. The data were analyzed cross-sectionally within intervals of gestational age and according to the time before the onset of preeclampsia. During the last two months of pregnancy in the normotensive controls, the level of sFlt-1 increased and the level of PlGF decreased. These changes occurred earlier and were more pronounced in the women in whom preeclampsia later developed. The sFlt-1 level increased beginning approximately five weeks before the onset of preeclampsia. At the onset of clinical disease, the mean serum level in the women with preeclampsia was 4382 pg per milliliter, as compared with 1643 pg per milliliter in controls with fetuses of similar gestational age (P<0.001). The PlGF levels were significantly lower in the women who later had preeclampsia than in the controls beginning at 13 to 16 weeks of gestation (mean, 90 pg per milliliter vs. 142 pg per milliliter, P=0.01), with the greatest difference occurring during the weeks before the onset of preeclampsia, coincident with the increase in the sFlt-1 level. Alterations in the levels of sFlt-1 and free PlGF were greater in women with an earlier onset of preeclampsia and in women in whom preeclampsia was associated with a small-for-gestational-age infant. Increased levels of sFlt-1 and reduced levels of PlGF predict the subsequent development of preeclampsia. Copyright 2004 Massachusetts Medical Society

T(H)-17 cells in the circle of immunity and autoimmunity.