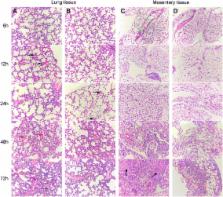 Cyclophilin A (CyPA), a ubiquitously distributed intracellular protein, is thought to be one of the important inflammatory factors and plays a significant role in the development process of sepsis. In the form of cytokine, CyPA deteriorates sepsis by promoting intercellular communication, apoptosis of endothelial cells and chemotactic effect on inflammatory cells. In our previous study, cyclophilin A of Clonorchis sinensis (CsCyPA), a type of excretory-secretory antigen, could induce the patients infected with Clonorchis sinensis to produce specific anti-CsCyPA antibodies. In this study, we investigated whether anti-CsCyPA antibodies could cross-react with CyPA and then play a protective role against sepsis, just like other anti-cytokine antagonists.

The mice model with sepsis was established with cecal ligation and puncture (CLP). Fifty mg/kg purified anti-CsCyPA antibodies were injected via the caudal vein 6 h after the CLP operation, and persistent observation was performed for 72 h. Blood samples and tissues were collected at 6 h, 12 h, 24 h, 48 h and 72 h after CLP. Cytokines in serum were measured by ELISA. Lung and mesentery tissues were stained with hematoxylin-eosin. Endothelial cells (ECs) isolated from murine aorta were co-cultured with CyPA of mice (MuCyPA) and anti-CsCyPAs for 24 h, then, viability was measured by Cell Counting Kit-8.

Anti-CsCyPA antibodies could combine with MuCyPA and inhibite its peptidyl prolyl isomerase (PPIase) activity. In the antibodies treatment group, blood coagulation indicators including PT, aPTT, D-dimer and platelet count were obviously more ameliorative, the proinflammary factors like IL-6, TNF-α, IL-1β were significantly lower at 12 h and 24 h after surgery and the viability of ECs was significantly improved compared to those in the control group. Furthermore, the survival rate was elevated, ranging from 10.0 % to 45.0 % compared to the control group.

These antibodies may have a favorable effect on sepsis via inhibition of enzymic activity or protection of endothelial cells.

Immunodesign of experimental sepsis by cecal ligation and puncture.

Michael A Flierl,  Daniel Rittirsch,  C. Ward … (2008)
Sepsis remains a prevalent clinical challenge and the underlying pathophysiology is still poorly understood. To investigate the complex molecular mechanisms of sepsis, various animal models have been developed, the most frequently used being the cecal ligation and puncture (CLP) model in rodents. In this model, sepsis originates from a polymicrobial infectious focus within the abdominal cavity, followed by bacterial translocation into the blood compartment, which then triggers a systemic inflammatory response. A requirement of this model is that it is performed with high consistency to obtain reproducible results. Evidence is now emerging that the accompanying inflammatory response varies with the severity grade of sepsis, which is highly dependent on the extent of cecal ligation. In this protocol, we define standardized procedures for inducing sepsis in mice and rats by applying defined severity grades of sepsis through modulation of the position of cecal ligation. The CLP procedure can be performed in as little as 10 min for each animal by an experienced user, with additional time required for subsequent postoperative care and data collection.

Rapid increase in hospitalization and mortality rates for severe sepsis in the United States: a trend analysis from 1993 to 2003.

Allergy, parasites, and the hygiene hypothesis.

M Yazdanbakhsh (2002)
The increase of allergic diseases in the industrialized world has often been explained by a decline in infections during childhood. The immunological explanation has been put into the context of the functional T cell subsets known as T helper 1 (TH1) and T helper 2 (TH2) that display polarized cytokine profiles. It has been argued that bacterial and viral infections during early life direct the maturing immune system toward TH1, which counterbalance proallergic responses of TH2 cells. Thus, a reduction in the overall microbial burden will result in weak TH1 imprinting and unrestrained TH2 responses that allow an increase in allergy. This notion is contradicted by observations that the prevalence of TH1-autoimmune diseases is also increasing and that TH2-skewed parasitic worm (helminth) infections are not associated with allergy. More recently, elevations of anti-inflammatory cytokines, such as interleukin-10, that occur during long-term helminth infections have been shown to be inversely correlated with allergy. The induction of a robust anti-inflammatory regulatory network by persistent immune challenge offers a unifying explanation for the observed inverse association of many infections with allergic disorders.