Glucocorticoid‐induced hyperglycaemia in respiratory disease: a systematic review and meta‐analysis 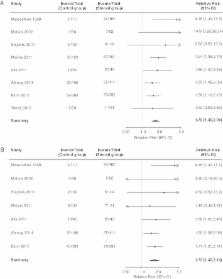 Antoni Torres,  Oriol Sibila,  Miquel Ferrer … (2015)
In patients with severe community-acquired pneumonia, treatment failure is associated with excessive inflammatory response and worse outcomes. Corticosteroids may modulate cytokine release in these patients, but the benefit of this adjunctive therapy remains controversial.

David R. Light,  D Niewoehner,  N Gross … (1999)
Although their clinical efficacy is unclear and they may cause serious adverse effects, systemic glucocorticoids are a standard treatment for patients hospitalized with exacerbations of chronic obstructive pulmonary disease (COPD). We conducted a double-blind, randomized trial of systemic glucocorticoids (given for two or eight weeks) or placebo in addition to other therapies, for exacerbations of COPD. Most other care was standardized over the six-month period of follow-up. The primary end point was treatment failure, defined as death from any cause or the need for intubation and mechanical ventilation, readmission to the hospital for COPD, or intensification of drug therapy. Of 1840 potential study participants at 25 Veterans Affairs medical centers, 271 were eligible for participation and were enrolled; 80 received an eight-week course of glucocorticoid therapy, 80 received a two-week course, and 111 received placebo. About half the potential participants were ineligible because they had received systemic glucocorticoids in the previous 30 days. Rates of treatment failure were significantly higher in the placebo group than in the two glucocorticoid groups combined at 30 days (33 percent vs. 23 percent, P=0.04) and at 90 days (48 percent vs. 37 percent, P=0.04). Systemic glucocorticoids (in both groups combined) were associated with a shorter initial hospital stay (8.5 days, vs. 9.7 days for placebo, P=0.03) and with a forced expiratory volume in one second that was about 0.10 liter higher than that in the placebo group by the first day after enrollment. Significant treatment benefits were no longer evident at six months. The eight-week regimen of therapy was not superior to the two-week regimen. The patients who received glucocorticoid therapy were more likely to have hyperglycemia requiring therapy than those who received placebo (15 percent vs. 4 percent, P=0.002). Treatment with systemic glucocorticoids results in moderate improvement in clinical outcomes among patients hospitalized for exacerbations of COPD. The maximal benefit is obtained during the first two weeks of therapy. Hyperglycemia of sufficient severity to warrant treatment is the most frequent complication.

Dexamethasone and length of hospital stay in patients with community-acquired pneumonia: a randomised, double-blind, placebo-controlled trial.

Henrik Endeman,  S Meijvis,  Bart M. C. Grutters … (2011)
Whether addition of corticosteroids to antibiotic treatment benefits patients with community-acquired pneumonia who are not in intensive care units is unclear. We aimed to assess effect of addition of dexamethasone on length of stay in this group, which might result in earlier resolution of pneumonia through dampening of systemic inflammation. In our double-blind, placebo-controlled trial, we randomly assigned adults aged 18 years or older with confirmed community-acquired pneumonia who presented to emergency departments of two teaching hospitals in the Netherlands to receive intravenous dexamethasone (5 mg once a day) or placebo for 4 days from admission. Patients were ineligible if they were immunocompromised, needed immediate transfer to an intensive-care unit, or were already receiving corticosteroids or immunosuppressive drugs. We randomly allocated patients on a one-to-one basis to treatment groups with a computerised randomisation allocation sequence in blocks of 20. The primary outcome was length of hospital stay in all enrolled patients. This study is registered with ClinicalTrials.gov, number NCT00471640. Between November, 2007, and September, 2010, we enrolled 304 patients and randomly allocated 153 to the placebo group and 151 to the dexamethasone group. 143 (47%) of 304 enrolled patients had pneumonia of pneumonia severity index class 4-5 (79 [52%] patients in the dexamethasone group and 64 [42%] controls). Median length of stay was 6·5 days (IQR 5·0-9·0) in the dexamethasone group compared with 7·5 days (5·3-11·5) in the placebo group (95% CI of difference in medians 0-2 days; p=0·0480). In-hospital mortality and severe adverse events were infrequent and rates did not differ between groups, although 67 (44%) of 151 patients in the dexamethasone group had hyperglycaemia compared with 35 (23%) of 153 controls (p<0·0001). Dexamethasone can reduce length of hospital stay when added to antibiotic treatment in non-immunocompromised patients with community-acquired pneumonia. None. Copyright © 2011 Elsevier Ltd. All rights reserved.