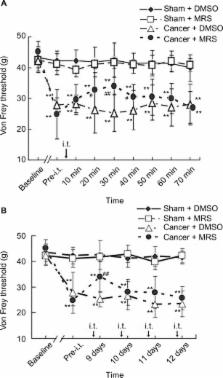 Cancer-induced bone pain (CIBP) is one of the most challenging clinical problems due to a lack of understanding the mechanisms. Recent evidence has demonstrated that activation of microglial G-protein-coupled P2Y 12 receptor (P2Y 12R) and proinflammatory cytokine production play an important role in neuropathic pain generation and maintenance. However, whether P2Y 12R is involved in CIBP remains unknown.

The purpose of this study was to investigate the role of P2Y 12R in CIBP and its molecular mechanisms. Using the bone cancer model inoculated with Walker 256 tumor cells into the left tibia of Sprague Dawley rat, we blocked spinal P2Y 12R through intrathecal administration of its selective antagonist MRS2395 (400 pmol/µL, 15 µL).

We found that not only the ionized calcium-binding adapter molecule 1 (Iba-1)-positive microglia in the ipsilateral spinal cord but also mechanical allodynia was significantly inhibited. Furthermore, it decreased the phosphorylation of p38 mitogen-activated protein kinase (p38 MAPK) and the production of proinflammatory cytokines interleukin-1β (IL-1β) and interleukin-6 (IL-6), whereas it increased tumor necrosis factor-α (TNF-α).

Taken together, our present results suggest that microglial P2Y 12R in the spinal cord may contribute to CIBP by the activation of spinal microglia and p38MAPK pathway, thus identifying a potential therapeutic target for the treatment of CIBP.

Identification of the platelet ADP receptor targeted by antithrombotic drugs.

A Nurden,  G Hollopeter,  V. Ramakrishnan … (2001)
Platelets have a crucial role in the maintenance of normal haemostasis, and perturbations of this system can lead to pathological thrombus formation and vascular occlusion, resulting in stroke, myocardial infarction and unstable angina. ADP released from damaged vessels and red blood cells induces platelet aggregation through activation of the integrin GPIIb-IIIa and subsequent binding of fibrinogen. ADP is also secreted from platelets on activation, providing positive feedback that potentiates the actions of many platelet activators. ADP mediates platelet aggregation through its action on two G-protein-coupled receptor subtypes. The P2Y1 receptor couples to Gq and mobilizes intracellular calcium ions to mediate platelet shape change and aggregation. The second ADP receptor required for aggregation (variously called P2Y(ADP), P2Y(AC), P2Ycyc or P2T(AC)) is coupled to the inhibition of adenylyl cyclase through Gi. The molecular identity of the Gi-linked receptor is still elusive, even though it is the target of efficacious antithrombotic agents, such as ticlopidine and clopidogrel and AR-C66096 (ref. 9). Here we describe the cloning of this receptor, designated P2Y12, and provide evidence that a patient with a bleeding disorder has a defect in this gene. Cloning of the P2Y12 receptor should facilitate the development of better antiplatelet agents to treat cardiovascular diseases.

Joyce DeLeo,  V Raghavendra,  F Y Tanga (2004)
Peripheral inflammation induces central sensitization characterized by the development of allodynia and hyperalgesia to mechanical and thermal stimuli. Recent evidence suggests that activation of glial cells and a subsequent increase in proinflammatory cytokines contribute to the development of behavioral hypersensitivity after nerve injury or peripheral inflammation. In the present study, we examined mRNA and protein expression of glial markers and proinflammatory cytokines at the lumbar spinal cord, brainstem and forebrain following intraplantar administration of complete Freunds adjuvant (CFA) in rats. Gene expression studied by real-time reverse transcriptase-polymerase chain reaction (RT-PCR) for microglial markers (Mac-1, TLR4 and CD14) showed a significant increase in their expression during all phases (acute, subacute and chronic) of inflammation. Conversely, up-regulation of astroglial markers [glial fibrillary acidic protein (GFAP) and S100B] was observed only at the subacute and chronic phases of inflammation. Increased immunoreactivity for OX-42 (CR3/CD11b) and GFAP at various brain regions was also observed after the acute and subacute phases of the inflammation, respectively. Quantification of proinflammatory cytokines (IL-1beta, IL-6 and TNF-alpha) at the mRNA (by real-time RT-PCR) and protein level (by ELISA) revealed enhanced expression during the acute, subacute and chronic phases of CFA-induced peripheral inflammation. This study demonstrates that CFA-induced peripheral inflammation induces robust glial activation and proinflammatory cytokines both spinally and supraspinally. In addition, similar to nerve injury-induced behavioral hypersensitivity microglial activation preceded astrocytic activation following CFA-induced peripheral inflammation, supporting a role of microglia in the initiation phase and astrocytes in maintaining hypersensitivity. These findings further support a unifying theory that glial activation and enhanced cytokine expression at the CNS have a role in eliciting behavioral hypersensitivity.

Neurochemical and cellular reorganization of the spinal cord in a murine model of bone cancer pain.

Matthew J Schwei,  Prisca Honore,  Scott Rogers … (1999)
The cancer-related event that is most disruptive to the cancer patient's quality of life is pain. To begin to define the mechanisms that give rise to cancer pain, we examined the neurochemical changes that occur in the spinal cord and associated dorsal root ganglia in a murine model of bone cancer. Twenty-one days after intramedullary injection of osteolytic sarcoma cells into the femur, there was extensive bone destruction and invasion of the tumor into the periosteum, similar to that found in patients with osteolytic bone cancer. In the spinal cord, ipsilateral to the cancerous bone, there was a massive astrocyte hypertrophy without neuronal loss, an expression of dynorphin and c-Fos protein in neurons in the deep laminae of the dorsal horn. Additionally, normally non-noxious palpation of the bone with cancer induced behaviors indicative of pain, the internalization of the substance P receptor, and c-Fos expression in lamina I neurons. The alterations in the neurochemistry of the spinal cord and the sensitization of primary afferents were positively correlated with the extent of bone destruction and the growth of the tumor. This "neurochemical signature" of bone cancer pain appears unique when compared to changes that occur in persistent inflammatory or neuropathic pain states. Understanding the mechanisms by which the cancer cells induce this neurochemical reorganization may provide insight into peripheral factors that drive spinal cord plasticity and in the development of more effective treatments for cancer pain.