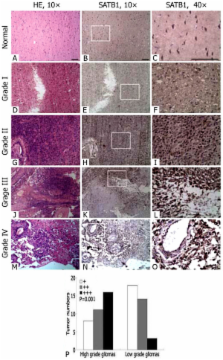 Special AT-rich sequence-binding protein-1 (SATB1) has been reported to be expressed in several human cancers and may have malignant potential. This study was aimed at investigating the expression and potential role of SATB1 in human glioma.

The relationship between SATB1 expression, clinicopathological parameters, Ki67 expression and MGMT promoter methylation status was evaluated, and the prognostic value of SATB1 expression in patients with gliomas was analyzed. SATB1-specific shRNA sequences were synthesized, and U251 cells were transfected with SATB1 RNAi plasmids. Expression of SATB1 mRNA and protein was investigated by RT-PCR and immunofluoresence staining and western blotting. The expression of c-Met, SLC22A18, caspase-3 and bcl-2 protein was determined by western blotting. U251 cell growth and adherence was detected by methyl thiazole tetrazolium assay. The apoptosis of U251 cells was examined with a flow cytometer. The adherence, invasion, and in vitro angiogenesis assays of U251 cells were done. The growth and angiogenesis of SATB1 low expressing U251 cells was measured in an in vivo xenograft model.

Of 70 tumors, 44 (62.9%) were positive for SATB1 expression. SATB1 expression was significantly associated with a high histological grade and with poor survival in univariate and multivariate analyses. SATB1 expression was also positively correlated with Ki67 expression but negatively with MGMT promoter methylation in glioma tissues. SATB1 shRNA expression vectors could efficiently induce the expression of SLC22A18 protein, increase the caspase-3 protein, inhibit the expression of SATB1, c-Met and bcl-2 protein, the growth, invasion, metastasis and angiogenesis of U251 cells, and induce apoptosis in vitro. Furthermore, the tumor growth of U251 cells expressing SATB1 shRNA were inhibited in vivo, and immunohistochemical analyses of tumor sections revealed a decreased vessel density in the animals where shRNA against SATB1 were expressed.

SATB1 may have an important role as a positive regulator of glioma development and progression, and that SATB1 might be a useful molecular marker for predicting the prognosis of glioma.

Inactivation of the DNA repair gene O6-methylguanine-DNA methyltransferase by promoter hypermethylation is a common event in primary human neoplasia.

S Baylin,  Ian Hamilton,  Karina P Bürger … (1999)
The DNA repair protein O6-methylguanine DNA methyltransferase (MGMT) removes alkyl adducts from the O6 position of guanine. MGMT expression is decreased in some tumor tissues, and lack of activity has been observed in some cell lines. Loss of expression is rarely due to deletion, mutation, or rearrangement of the MGMT gene, but methylation of discrete regions of the CpG island of MGMT has been associated with the silencing of the gene in cell lines. We used methylation-specific PCR to study the promoter methylation of the MGMT gene. All normal tissues and expressing cancer cell lines were unmethylated, whereas nonexpressing cancer cell lines were methylated. Among the more than 500 primary human tumors examined, MGMT hypermethylation was present in a subset of specific types of cancer. In gliomas and colorectal carcinomas, aberrant methylation was detected in 40% of the tumors, whereas in non-small cell lung carcinomas, lymphomas, and head and neck carcinomas, this alteration was found in 25% of the tumors. MGMT methylation was found rarely or not at all in other tumor types. We also analyzed MGMT expression by immunohistochemistry in relation to the methylation status in 31 primary tumors. The presence of aberrant hypermethylation was associated with loss of MGMT protein, in contrast to retention of protein in the majority of tumors without aberrant hypermethylation. Our results suggest that epigenetic inactivation of MGMT plays an important role in primary human neoplasia.

Daniele Generali,  M P Brizzi,  Giovanni Allevi … (2006)
To investigate the relationship of hypoxia-inducible factor-1alpha (HIF-1alpha) tumor expression in predicting the response to epirubicin and disease-free survival (DFS) in patients with breast cancer enrolled in a single institution trial of primary anthracycline and tamoxifen therapy. The expression of HIF-1alpha was assessed by immunohistochemistry in 187 patients with T(2-4) N(0-1) breast cancer enrolled in a randomized trial comparing four cycles of single agent epirubicin versus epirubicin + tamoxifen as primary systemic treatment. All patients postoperatively received four cycles of the four weekly i.v. CMF regimen (cyclophosphamide, methotrexate, and 5-fluorouracil). Patients with estrogen receptor (ER)-positive primary tumors also underwent 5 years of treatment with adjuvant tamoxifen. Carbonic anhydrase IX (CAIX) was also scored as a marker of HIF activity. Overall response to therapy progressively decreased with increasing tumor HIF-1alpha (P < 0.05), and HIF-1alpha was an independent predictor of response (P < 0.048). HIF-1alpha expression was also associated with a significantly shorter DFS (P < 0.02) in all patients and in ER-positive but not in ER-negative patients. Furthermore, CAIX positivity conferred a significantly shorter DFS (P = 0.02) compared with CAIX-negative tumors in patients with HIF-1alpha-negative tumors. HIF-1alpha expression in patients with breast cancer is a marker of poor therapy response and outcome, especially in ER-positive patients. The combination of two hypoxia markers has greater utility than assessing just one, and patients with hypoxia markers in their tumors may be suitable for administration of drugs that reduce HIF-1alpha expression and increase oxygen delivery to the tumor bed before starting neoadjuvant therapies.

Tony Kouzarides (1999)
There are several enzymes, acetylases and deacetylases, that can regulate transcription by modifying the acetylation state of histones or other promoter-bound transcription factors. Some of these enzymes are present in multisubunit complexes. Recent efforts to understand the biological role of these enzymes reveals their involvement in cell-cycle regulation and differentiation. Furthermore, accumulating evidence suggests that deregulation of acetylase and deacetylase activity plays a causative role in the generation of cancer.