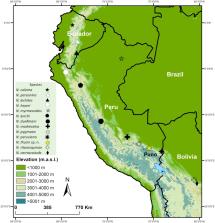 We describe a new species of minute, terrestrial-breeding frog in the genus Noblella. We collected a single specimen in the leaf litter of primary montane forest (2,225 m a.s.l.) near Thiuni, in the Provice of Carabaya, Department of Puno, in the upper watershed of a tributary of the Inambari River of southern Peru, the same locality where we found the types of Psychrophrynella glauca Catenazzi & Ttito 2018. We placed the new species within Noblella on the basis of molecular data, minute size, and overall morphological resemblance with the type species N. peruviana and other species of Noblella, including having three phalanges on finger IV (as in N. coloma, N. heyeri, N. lynchi, N. madreselva, N. peruviana, and N. pygmaea), and terminal phalanges T-shaped and pointed. Noblella thiuni sp. n. is distinguished from all other species of Noblella by having ventral surfaces of legs bright red, and chest and belly copper reddish with a profusion of silvery spots. The new species further differs from known Peruvian species of Noblella by the combination of the following characters: tympanic membrane absent, eyelids lacking tubercles, dorsal skin finely shagreen, tarsal tubercles or folds absent, three phalanges on Finger IV, tips of digits not expanded, no circumferential grooves on digits, inguinal spots present. The new species has a snout–vent length of 11.0 mm in one adult or subadult male. Our new finding confirms the high levels of endemism and beta diversity of small, terrestrial-breeding frogs inhabiting the moss layers and leaf litter in the montane forests of the Amazonian slopes of the Andes and adjacent moist puna grasslands, and suggests much work remains to be done to properly document this diversity.

The integrative future of taxonomy

José M. Padial,  Aurélien Miralles,  Ignacio De la Riva … (2010)
Background Taxonomy is the biological discipline that identifies, describes, classifies and names extant and extinct species and other taxa. Nowadays, species taxonomy is confronted with the challenge to fully incorporate new theory, methods and data from disciplines that study the origin, limits and evolution of species. Results Integrative taxonomy has been proposed as a framework to bring together these conceptual and methodological developments. Here we review perspectives for an integrative taxonomy that directly bear on what species are, how they can be discovered, and how much diversity is on Earth. Conclusions We conclude that taxonomy needs to be pluralistic to improve species discovery and description, and to develop novel protocols to produce the much-needed inventory of life in a reasonable time. To cope with the large number of candidate species revealed by molecular studies of eukaryotes, we propose a classification scheme for those units that will facilitate the subsequent assembly of data sets for the formal description of new species under the Linnaean system, and will ultimately integrate the activities of taxonomists and molecular biologists.

D R Vieites,  Miguel Vences,  Meike Thomas … (2005)
Amphibians globally are in decline, yet there is still a tremendous amount of unrecognized diversity, calling for an acceleration of taxonomic exploration. This process will be greatly facilitated by a DNA barcoding system; however, the mitochondrial population structure of many amphibian species presents numerous challenges to such a standardized, single locus, approach. Here we analyse intra- and interspecific patterns of mitochondrial variation in two distantly related groups of amphibians, mantellid frogs and salamanders, to determine the promise of DNA barcoding with cytochrome oxidase subunit I (cox1) sequences in this taxon. High intraspecific cox1 divergences of 7-14% were observed (18% in one case) within the whole set of amphibian sequences analysed. These high values are not caused by particularly high substitution rates of this gene but by generally deep mitochondrial divergences within and among amphibian species. Despite these high divergences, cox1 sequences were able to correctly identify species including disparate geographic variants. The main problems with cox1 barcoding of amphibians are (i) the high variability of priming sites that hinder the application of universal primers to all species and (ii) the observed distinct overlap of intraspecific and interspecific divergence values, which implies difficulties in the definition of threshold values to identify candidate species. Common discordances between geographical signatures of mitochondrial and nuclear markers in amphibians indicate that a single-locus approach can be problematic when high accuracy of DNA barcoding is required. We suggest that a number of mitochondrial and nuclear genes may be used as DNA barcoding markers to complement cox1.