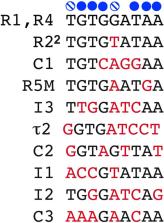 Bacteria, like all cells, must precisely duplicate their genomes before they divide. Regulation of this critical process focuses on forming a pre-replicative nucleoprotein complex, termed the orisome. Orisomes perform two essential mechanical tasks that configure the unique chromosomal replication origin, oriC to start a new round of chromosome replication: (1) unwinding origin DNA and (2) assisting with loading of the replicative DNA helicase on exposed single strands. In Escherichia coli, a necessary orisome component is the ATP-bound form of the bacterial initiator protein, DnaA. DnaA-ATP differs from DnaA-ADP in its ability to oligomerize into helical filaments, and in its ability to access a subset of low affinity recognition sites in the E. coli replication origin. The helical filaments have been proposed to play a role in both of the key mechanical tasks, but recent studies raise new questions about whether they are mandatory for orisome activity. It was recently shown that a version of E. coli oriC ( oriC allADP ), whose multiple low affinity DnaA recognition sites bind DnaA-ATP and DnaA-ADP similarly, was fully occupied and unwound by DnaA-ADP in vitro, and in vivo suppressed the lethality of DnaA mutants defective in ATP binding and ATP-specific oligomerization. However, despite their functional equivalency, orisomes assembled on oriC allADP were unable to trigger chromosome replication at the correct cell cycle time and displayed a hyper-initiation phenotype. Here we present a new perspective on DnaA-ATP, and suggest that in E. coli, DnaA-ATP is not required for mechanical functions, but rather is needed for site recognition and occupation, so that initiation timing is coupled to DnaA-ATP levels. We also discuss how other bacterial types may utilize DnaA-ATP and DnaA-ADP, and whether the high diversity of replication origins in the bacterial world reflects different regulatory strategies for how DnaA-ATP is used to control orisome assembly.

Lakshminarayan M. Iyer,  Detlef Leipe,  Eugene V. Koonin … (2015)
The AAA+ ATPases are enzymes containing a P-loop NTPase domain, and function as molecular chaperones, ATPase subunits of proteases, helicases or nucleic-acid-stimulated ATPases. All available sequences and structures of AAA+ protein domains were compared with the aim of identifying the definitive sequence and structure features of these domains and inferring the principal events in their evolution. An evolutionary classification of the AAA+ class was developed using standard phylogenetic methods, analysis of shared sequence and structural signatures, and similarity-based clustering. This analysis resulted in the identification of 26 major families within the AAA+ ATPase class. We also describe the position of the AAA+ ATPases with respect to the RecA/F1, helicase superfamilies I/II, PilT, and ABC classes of P-loop NTPases. The AAA+ class appears to have undergone an early radiation into the clamp-loader, DnaA/Orc/Cdc6, classic AAA, and "pre-sensor 1 beta-hairpin" (PS1BH) clades. Within the PS1BH clade, chelatases, MoxR, YifB, McrB, Dynein-midasin, NtrC, and MCMs form a monophyletic assembly defined by a distinct insert in helix-2 of the conserved ATPase core, and additional helical segment between the core ATPase domain and the C-terminal alpha-helical bundle. At least 6 distinct AAA+ proteins, which represent the different major clades, are traceable to the last universal common ancestor (LUCA) of extant cellular life. Additionally, superfamily III helicases, which belong to the PS1BH assemblage, were probably present at this stage in virus-like "selfish" replicons. The next major radiation, at the base of the two prokaryotic kingdoms, bacteria and archaea, gave rise to several distinct chaperones, ATPase subunits of proteases, DNA helicases, and transcription factors. The third major radiation, at the outset of eukaryotic evolution, contributed to the origin of several eukaryote-specific adaptations related to nuclear and cytoskeletal functions. The new relationships and previously undetected domains reported here might provide new leads for investigating the biology of AAA+ ATPases.

Chromosome replication and the division cycle of Escherichia coli B/r.

Regulation of the replication cycle: conserved and diverse regulatory systems for DnaA and oriC.

Tsutomu Katayama,  Kenji Keyamura,  Kazuyuki Fujimitsu … (2010)
Chromosomal replication must be limited to once and only once per cell cycle. This is accomplished by multiple regulatory pathways that govern initiator proteins and replication origins. A principal feature of DNA replication is the coupling of the replication reaction to negative-feedback regulation. Some of the factors that are important in this process have been discovered, including the clamp (DNA polymerase III subunit-beta (DnaN)), the datA locus, SeqA, DnaA homologue protein (Hda) and YabA, as well as factors that are involved at other stages of the regulatory mechanism, such as DnaA initiator-associating protein (DiaA), the DnaA-reactivating sequence (DARS) loci and Soj. Here, we describe the regulation of DnaA, one of the central proteins involved in bacterial DNA replication, by these factors in Escherichia coli, Bacillus subtilis and Caulobacter crescentus.