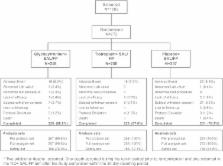 The optimal use of various therapeutic combinations for moderate/severe chronic obstructive pulmonary disease (COPD) is unclear. The GLISTEN trial compared the efficacy of two long-acting anti-muscarinic antagonists (LAMA), when combined with an inhaled corticosteroid (ICS) and a long-acting β2 agonist (LABA).

This randomised, blinded, placebo-controlled trial in moderate/severe COPD patients compared once-daily glycopyrronium (GLY) 50 µg, once-daily tiotropium (TIO) 18 µg or placebo (PLA), when combined with salmeterol/fluticasone propionate (SAL/FP) 50/500 µg twice daily. The primary objective was to determine the non-inferiority of GLY+SAL/FP versus TIO+SAL/FP on trough FEV 1 after 12 weeks. An important secondary objective was whether addition of GLY to SAL/FP was better than SAL/FP alone.

Jorgen Vestbo,  Christine Jenkins,  Peter M A Calverley … (2007)
Long-acting beta-agonists and inhaled corticosteroids are used to treat chronic obstructive pulmonary disease (COPD), but their effect on survival is unknown. We conducted a randomized, double-blind trial comparing salmeterol at a dose of 50 microg plus fluticasone propionate at a dose of 500 microg twice daily (combination regimen), administered with a single inhaler, with placebo, salmeterol alone, or fluticasone propionate alone for a period of 3 years. The primary outcome was death from any cause for the comparison between the combination regimen and placebo; the frequency of exacerbations, health status, and spirometric values were also assessed. Of 6112 patients in the efficacy population, 875 died within 3 years after the start of the study treatment. All-cause mortality rates were 12.6% in the combination-therapy group, 15.2% in the placebo group, 13.5% in the salmeterol group, and 16.0% in the fluticasone group. The hazard ratio for death in the combination-therapy group, as compared with the placebo group, was 0.825 (95% confidence interval [CI], 0.681 to 1.002; P=0.052, adjusted for the interim analyses), corresponding to a difference of 2.6 percentage points or a reduction in the risk of death of 17.5%. The mortality rate for salmeterol alone or fluticasone propionate alone did not differ significantly from that for placebo. As compared with placebo, the combination regimen reduced the annual rate of exacerbations from 1.13 to 0.85 and improved health status and spirometric values (P<0.001 for all comparisons with placebo). There was no difference in the incidence of ocular or bone side effects. The probability of having pneumonia reported as an adverse event was higher among patients receiving medications containing fluticasone propionate (19.6% in the combination-therapy group and 18.3% in the fluticasone group) than in the placebo group (12.3%, P<0.001 for comparisons between these treatments and placebo). The reduction in death from all causes among patients with COPD in the combination-therapy group did not reach the predetermined level of statistical significance. There were significant benefits in all other outcomes among these patients. (ClinicalTrials.gov number, NCT00268216 [ClinicalTrials.gov].). Copyright 2007 Massachusetts Medical Society.

A 4-year trial of tiotropium in chronic obstructive pulmonary disease.

Steven Kesten,  Marc Decramer,  ALBERTO PAPI … (2008)
Previous studies showing that tiotropium improves multiple end points in patients with chronic obstructive pulmonary disease (COPD) led us to examine the long-term effects of tiotropium therapy. In this randomized, double-blind trial, we compared 4 years of therapy with either tiotropium or placebo in patients with COPD who were permitted to use all respiratory medications except inhaled anticholinergic drugs. The patients were at least 40 years of age, with a forced expiratory volume in 1 second (FEV(1)) of 70% or less after bronchodilation and a ratio of FEV(1) to forced vital capacity (FVC) of 70% or less. Coprimary end points were the rate of decline in the mean FEV(1) before and after bronchodilation beginning on day 30. Secondary end points included measures of FVC, changes in response on St. George's Respiratory Questionnaire (SGRQ), exacerbations of COPD, and mortality. Of a total of 5993 patients (mean age, 65+/-8 years) with a mean FEV(1) of 1.32+/-0.44 liters after bronchodilation (48% of predicted value), we randomly assigned 2987 to the tiotropium group and 3006 to the placebo group. Mean absolute improvements in FEV(1) in the tiotropium group were maintained throughout the trial (ranging from 87 to 103 ml before bronchodilation and from 47 to 65 ml after bronchodilation), as compared with the placebo group (P<0.001). After day 30, the differences between the two groups in the rate of decline in the mean FEV(1) before and after bronchodilation were not significant. The mean absolute total score on the SGRQ was improved (lower) in the tiotropium group, as compared with the placebo group, at each time point throughout the 4-year period (ranging from 2.3 to 3.3 units, P<0.001). At 4 years and 30 days, tiotropium was associated with a reduction in the risks of exacerbations, related hospitalizations, and respiratory failure. In patients with COPD, therapy with tiotropium was associated with improvements in lung function, quality of life, and exacerbations during a 4-year period but did not significantly reduce the rate of decline in FEV(1). (ClinicalTrials.gov number, NCT00144339.) 2008 Massachusetts Medical Society