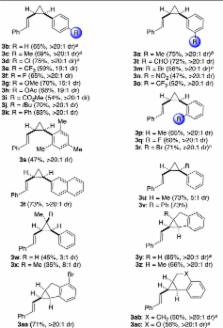 A highly stereoselective gold(I)-catalyzed cis-vinylcyclopropanation of alkenes has been developed. Allylic gold carbenes, generated via a retro-Buchner reaction of 7-alkenyl-1,3,5-cycloheptatrienes, react with alkenes to form vinylcyclopropanes. The gold(I)-catalyzed retro-Buchner reaction of these substrates proceeds by simple heating at a temperature much lower than that required for the reaction of 7-aryl-1,3,5-cycloheptatrienes (75 °C vs 120 °C). A newly developed Julia–Kocienski reagent enables the synthesis of the required cycloheptatriene derivatives in one step from readily available aldehydes or ketones. On the basis of mechanistic investigations, a stereochemical model for the cis selectivity was proposed. An unprecedented gold-catalyzed isomerization of cis- to trans-cyclopropanes has also been discovered and studied by DFT calculations.

A general model for selectivity in olefin cross metathesis.